TwitDir is the White Pages for Twits aka People on Twitter

When Twitter originally launched, it offered an integrated, basic directory search function. For one reason or another, it vanished over night. It was a disappointing move as I, like many, relied on search to catch up with friends that we knew were on Twitter, but we were all too busy to remember the IDs, let alone add them to our email signatures and business cards for future reference.

TwitDir is one of the many cool third party apps that reintroduces directory search into Twitter, allowing all of us to, once again, find other Twits to follow. 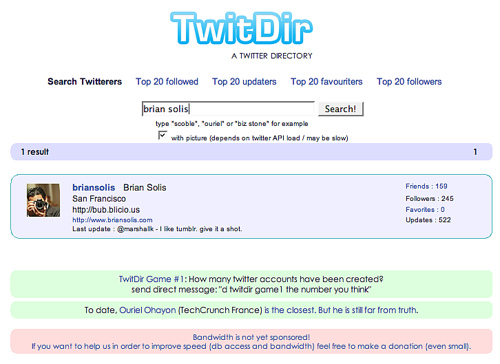 But, it’s also much more than a mere directory. Not only can you look up people, but you can also search topics to see who’s writing about the things you care about. This is especially important for those tracking the most influential voices on any given subject. Hopefully they’ll include bios in the search function. As of now, they do not.

And if ego comparisons are your thing, TwitDir maintains an active list of Top 20 followed, updaters, favorit’ers, and followers.

The Twitter phenomenon continues. Try not to resist…it will consume you sooner or later.