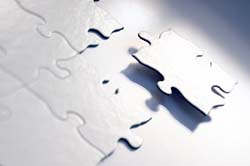 2006 – 2007 saw the rise of new media and it has been nothing short of disruptive for journalists, communications professionals, newsmakers, and the people formerly known as the audience.

I’m sure this isn’t news to you. After all, you’re reading this blog, which says that you’re already part of the new media movement and are mostly likely creating your own media as well.

Whether you’re in technology or not, there are some very important movements taking place in the world of new media, influence, and the ability to discover the most authoritative voices.

MediaMap, Burrells, Listlogix, among others have done a decent job over the years of tracking traditional media, but none have embraced new media effectively. New services have emerged to help such as Dow Jones, BuzzLogic, among others, which track Social Media metrics and the conversations defining your markets.

But what if you don’t have the budget to afford these new services?

So far, the best results have been generated by resourceful people who research, listen, and identify the right people covering your markets. As I’ve said before, there are two different search strategies that should matter to you…traditional search and blog search. Both are distinct in how they shape your communications program.

In the world of new media, blog search engines such as Google Blog Search, Sphere, Ask.com, and Blogpulse have become the standards for identifying blogs covering key words and topics. In my opinion, Technorati however, stood out among the fray as the definitive headquarters for listening, tracking conversations, measuring influence, viewing popular topics, and discovering the voices that matter to you.

Among the services Technorati offers, its top 100 blog list has become the standard for identifying the most authoritative voices in the blogosphere.

Now that list is being challenged by Gabe Rivera, founder of Techmeme, a unique service that tracks popular conversations as they unite around particular topics and automatically refreshes as each topic expands.

Gabe Rivera introduced the Techmeme Leaderboard which tracks the most consistent sources of popular discussions and news and ranks them based on presence. 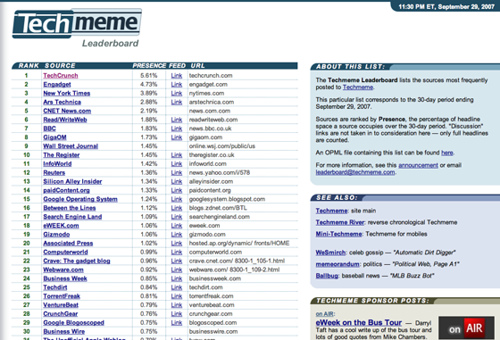 Presence is measured by the percentage of headline space a source occupies over a 30-day period. Instead of tracking links, its measuring influence.

I know what you’re saying…I don’t work in tech, so why does this matter to me?

I promise to get to that.

Gabe explained his reasons for creating the Leaderboard in his introductory post, “I suppose this is long overdue. For two years, I’ve been urged to publish such a list. Why? Techmeme, in surfacing the latest tech news, also identifies leaders in tech reporting. As a friend who works in PR recently told me, ‘I gauge hot new blogs via Techmeme.'” 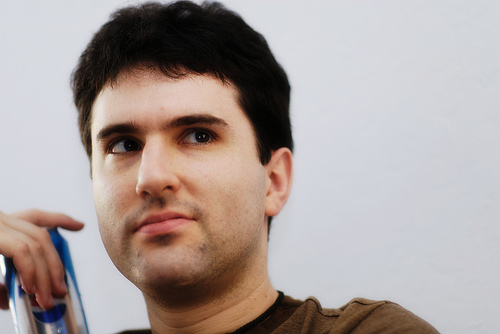 Techmeme is unique amongst the other Social Media tracking tools and services. It introduces familiar voices around conversations but also includes new voices to the subject. This broadens the horizons for PR pros and reinforces the need for them to look beyond the A-List and start tracking the people who truly have a peer-to-peer relationship with your customers.

Gabe Rivera’s platform is expanding into new industries and also uses the same methodology to track conversations. Additional properties include WeSmirch, entertainment gossip, Memorandum, politics, and BallBug, baseball. As of now, Leaderboard is covering tech, but will eventually migrate to the other sites.

So, let’s get back to the Leaderboard. While it doesn’t yet track the top 100 for other industries, its spotlight on tech is very revealing and introduces a new look at the mixture of new and traditional media (the full list is below).

The number one spot goes to TechCrunch, which is number two on the Technorati 100 list. But what’s interesting and important here, is that traditional media is demonstrating that cultivating an online presence rivals even the most popular blogs.

For example, New York Times is at number three, the BBC is at number eight, Infoworld at nine, and The Wall Street Journal rounds out the number ten position. In fact of the top 100 online authorities, 26 are traditional journals, magazines and newspapers with online branches.

And, are you ready for this?

Two of the top 100 sources for news iare traditional wire services! BusinessWire, number 29, and PR Newswire, number 38, have been sourced more for news than ZDNet, PC World, Wired, Washington Post, Forbes, Bloomberg, and many others.

This demonstrates that the right press releases can spark conversation regardless of distributing in a social or traditional format. 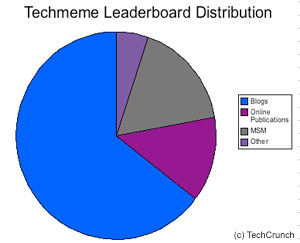 Attention PR people and company executives! Don’t underestimate the value of either traditional or new media. Your campaigns should not be limited to either blogs or press, nor should it simply focus on the Top 100 list at Techmeme, Technorati or any other service. The best communications strategies will envelop not only authorities in new and traditional media, but also those voices in the Magic Middle of the attention curve who help carry information and discussions among your customers. The Magic Middle is defined as the bloggers who have from 20-1000 other people linking to them.

While these lists are representative of the people you ideally wish to reach, it doesn’t give you an invitation to spam them. At the end of the day, this is all about relationships and it all starts with listening and reading.

So wrapping things up, I had a chance to speak with Gabe about the Leaderboard prior to launch, thank you Gabe!

PR2.0 – Do you see the leaderboard also going live across your other sites?

Rivera – Technorati’s list ranks the general blogosphere. You can use it to support claims like “PostSecret is among the Top 100 blogs.” Techmeme’s list identifies leaders in tech news reporting. Blogs are listed among non-blogs. It’s a good reflection of the realities of today’s news media.

PR2.0 – Were you surprised by the mixture of traditional media v new media?

Rivera – Nope, my sites are built around the understanding that both have a major role in tech news.

I know from speaking to PR professionals that they need to keep current on who the influencers are. And it’s not as obvious as it seems. There’s churn; they keep changing. (e.g., Silicon Alley Insider came out of nowhere this summer.) So this list, which is updated every 20 minutes, should definitely help.

PR2.0 – What do you think about Businesswire and PRNewswire showing up in the mix?

Rivera – Fine by me. Occasionally press releases contain pertinent details not emphasized elsewhere. That’s usually the case when they appear on Techmeme.

Additional voices on the subject:

4 COMMENTS ON THIS POST To “Techmeme Launches Top 100 Leaderboard, A New Resource for Tracking Influence”