Friendfeed officially launched this week making it the latest entrant into the foray of applications dedicated to channeling lifestreams and activity feeds. It also happens to be the newest ambassador for the emerging microblog and micromedia categories.

In other words, Friendfeed is representative of the evolving concept of lifestreams or workstreams that I’ve been talking about for a long, long time. Instead of simply appealing to the edglings, Friendfeed is bringing the concept of aggregated streams to the masses or at least to the early market majority.

It takes the value of Facebook’s combined personal “News Feeds,” breaks it out of a closed network, and broadcasts it to anyone who’s interested in what you’re up to.

But its not an ego thing…this is about new mediums for conversations.

Friendfeed allows you to stream all of your activity across various forms of social media and social networks into one river. It aggregates presence, thoughts, activity, interests and other custom updates based on the tools you use. Supported sites include delicious, last.fm, Twitter, Pownce, Digg, Reddit, blog RSS feeds, Flickr, Smugmug, LinkedIn, Pandora, Upcoming.org, among many, many others. Basically, if it has an RSS feed, you can stream it into Friendfeed.

It is also a tool for hosting original content through text and links. You can manually enter updates directly into the FF river. Visitors can also comment on each entry or link back to it. This gives the appearance of conversations, although, I see more value in following individual links directly to their source to comment and converse there.

Your friends and fans can subscribe to your feed to stay in sync with your online activity. In turn, you can stay connected to those you follow as well.

I currently use Tumblr, Plaxo, and Jaiku to host my official Lifestreams. To me, Friendfeed most closely resembles Jaiku in terms of openness, appearance, and functionality. Whereas, Tumblr offers a more custom-branded blog look and feel. And Plaxo, well, it is closer to how I use Facebook to aggregate and package strategic activity within a fixed community. Although, Plaxo is also similar to Friendfeed in the sense that it is a portable and embeddable lifestream. Similar functionality, different demographic.

Even though, it’s mostly in the echo chamber, there are already cries of social media fatigue, both creation and consumption. Services such as Tumblr, Twitter, Pownce, Utterz, Twitxr, and Jaiku allow people to share shorter, hopefully more poignant, updates (mediabytes aka media snacks) to stay connected to their communities without having to craft longer, time-consuming blog posts.

Tools such as Friendfeed, Plaxo, Jaiku, Tumblr, and other “channeling” and social graph tools collect all forms of microblog and micromedia output so that your contacts are not overwhelmed by trying to keep up with your updates at every point of origination.

So, for the most part, the data that I’m channeling into Friendfeed is duplicative across several networks. That’s the point. My network of friends (socialgraph) don’t reside within one community. I have to go to where they are in order to stay connected and visible among them.

FriendFeed seems to be the first mainstream tool that could gain notable traction with the MySpace generation, especially since they offer an embeddable widget that broadcasts updates on the fly.

So, depending on your strategy for marketing and promoting your personal brand online, use the tools that resonate with the people you want to reach – even if it’s channeling the same data across the Web.

You can subscribe to my Friendfeed here, Plaxo here, and my Tumblr feed here. The others are at the end of the post. 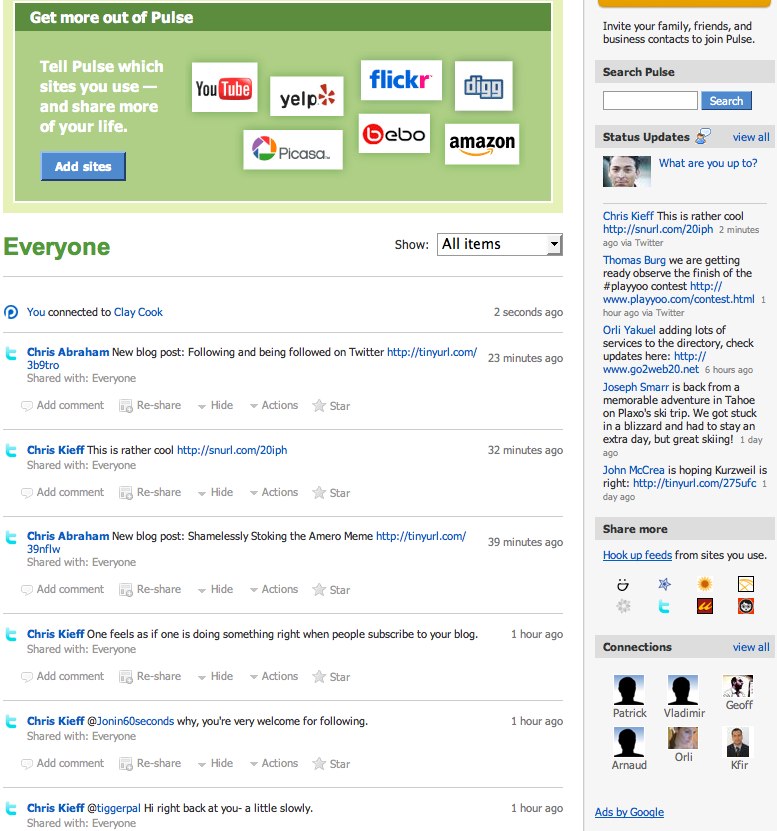