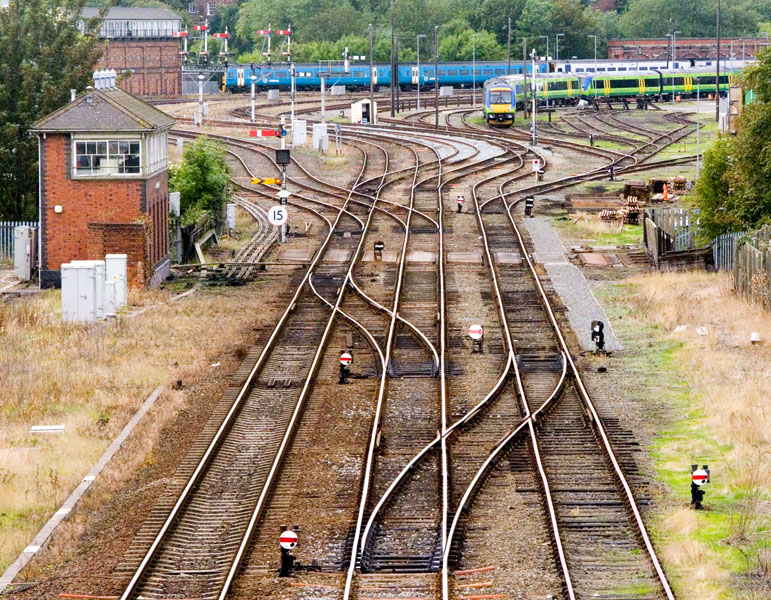 Whether you like it or not, the headline is true…

Looks like I wasn’t the only one to receive an interesting email from BusinessWire, ReadWriteWeb already ran a story about it.

BusinessWire is a press release wire service that, among other things, is one of the largest players in the industry for distributing news and content between PR and journalists, analysts, bloggers, investors, and other wire subscribers.

Basically, BusinessWire is proactively claiming that companies and marketers can use the distribution service to bypass journalists and bloggers to reach news aggregation services such as Techmeme and also earn rankings and visibility in traditional search engines.

Well written press releases are far from dead. In fact, when developed strategically, their opportunities, appeal and benefits are only expanding in conjunction with the groups of various influencers and consumers who rely on them for relevant information.

However, in order to frame this properly, nothing replaces good old fashioned relationships. It is imperative that you still reach out to press, bloggers, analysts, and other influencers on an ongoing basis, not only when you have news to share. Make sure that as you do, you’re taking into consideration, their preferences and methods for contact.

For those who do not know, Techmeme is a resourceful service that actively tracks and ranks conversations related to the most popular and potentially influential tech topics throughout the world of media, as it happens. It’s actually quite fascinating to watch. Creator Gabe Rivera has also replicated his news listening and aggregation formula for the entertainment, political, and Baseball markets.

Basically, the more people that either link to, or who discuss a common topic, a “meme” will appear on the site and move according to activity as well as compared to the activity of other stories. As shown below, the picture represents a snapshot of conversations around Micosoft and Yahoo acquisition news sourced to the original press releases, which if you think about it, shows that press releases still work. 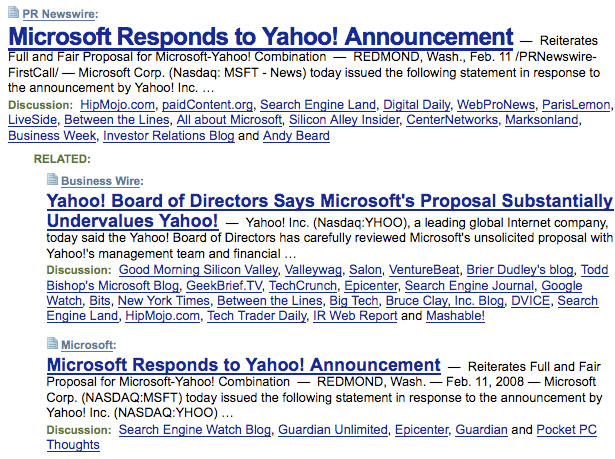 Over the course of the last several months, BusinessWire and PRNewswire have consistently ranked in the top 100 sources for news in Techmeme’s Leaderboard.

It is indeed representative of a new channel of influence. However, through experience, I can tell you that running a story to the top influencers in advance, or in replacement of a press release, yields more effective results in Techmeme.

I reached out to Gabe Rivera to talk about his perspective on wires serving as authorities on news sourcing over other media, “It really comes down to where bloggers and media link to the most. If they find the story through search engines or directly on the wire site, then it is the authoritative source of the news.”

Rivera continued, “As far as the Leaderboard goes, whether it’s sourced through search engines, such as Yahoo Business or Google News, the wire service will receive proper accreditation.”

As we discussed the subject further, we stumbled onto a discussion that is near and dear to me, corporate blogging.

Rivera shared, “What I wish we would see more of is companies that share their news on their blog. Not just repurposing a press releaes, but actually sharing the news with their community in a more friendly way. The symbolism which it stands for would be nicer and more helpful. With good SEO, people will find them.”

He’s right. With good SEO, and good media and blogger relations, people will not only find, but share the news.

We both agreed that certain companies are still required to distribute press releases on the wire as a form of proper discloser. At the end of the day, it all comes down to where the majority of story tellers and influencers source and link back.

Now outside of Techmeme, especially if you’re not in tech, most wire services offer SEO packages that help you bypass journalists and bloggers and reach customers directly.

BusinessWire finally spotlights something that I’ve been talking about for ten years (as well many as other folks such as Greg Jarboe, Lee Odden and Sally Falkow), that you can distribute a well written press release on the wire and have it “appear” in search engines. In fact, it has spawned a new style of press releases, dubbed SEO releases, that are SEO optimized in order to improve their “findability” and rank within traditional search engines. In this case, the greatest targets for SEO releases are actually customers, not journalists. In many cases, they complement a traditional release for media and a Social Media Release for bloggers and (also customers.)

Here’s an example of a press release for Magnify.net that appears in Google and Yahoo News courtesy of MarketWire, an alternative to BusinessWire.

According to a recent Outsell study, over 51% of IT professionals report that they get their news from press releas
es in Yahoo and Google news over trade journals.

And it’s not just tech. When implemented with calls and links to a
ctions, and reads in a way that’s compelling to people aka customers, they do something about it.

Greg Jarboe also tells a great story of how his client, Southwest, issued an SEO press release about new lower fares and was directly responsible for generating ~$2 million in sales courtesy of search and customers discovery and sharing of the news.

It’s true. SEO PR works. What it does, at the same time, is expand the the scope of Public Relations into the realm of Web and search marketing.

Note of caution however, the same tools that help you expand visibility, can also set up for failure. Wire services only edit for typos, not for content. This means that you can publish a release riddled with hyperbole, spin, buzz words, and hype that will only serve to confuse and dissuade your customers from doing business with you. It will send them to your competition.

So, what do we learn from this?

That there are a myriad of channels and benefits for press releases and not one format, or flavor, serves everyone. The strategic and genuine use of a variety of tools and distribution channels, along with compelling, focuses, and relevant content, can help you reach people, whether they’re journalists, bloggers, analysts, investors, customers, or influencers, to help you tell and share your story, or ultimately, contribute to the bottom line of your business.