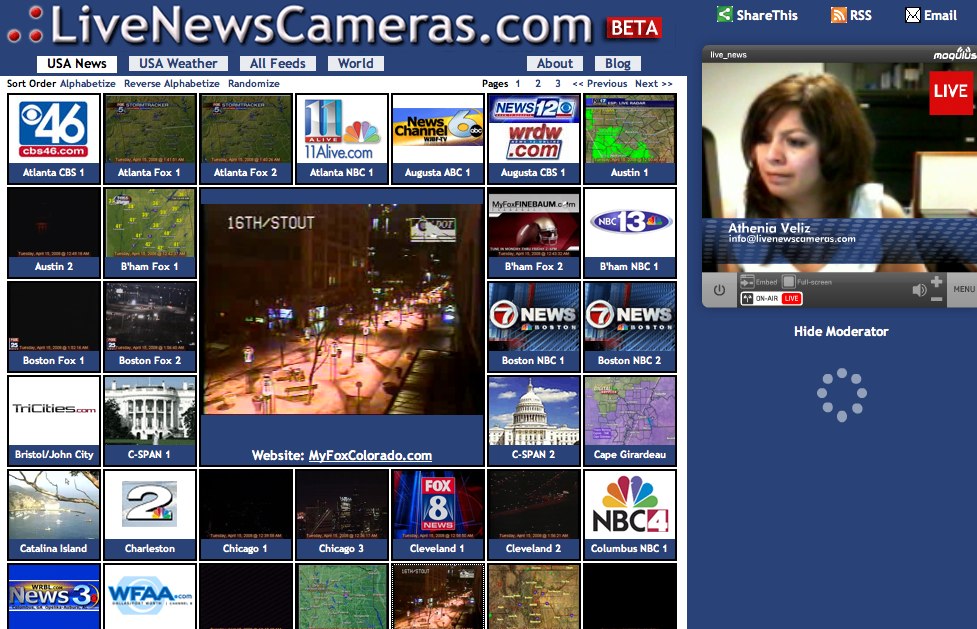 Finlayson is part of a small, but dedicated and innovative team of journalists in Chicago who are reinventing how we view broadcast news. Think of it as cable news TV meets Twitter meets uStream, meets Friendfeed. LiveNewsCameras.com is an online portal that lets people watch news as it happens anywhere in the world by aggregating the video feeds from participating networks. Driven by their motto, “Veritas odit moras,” from line 850 of Seneca’s version of Oedipus, “Truth hates delay,” the team has has aggregated live news feeds from journalists and stations. There are over 150 channels of live, 24/7 streaming video from major markets across the county and the globe – with more added daily.

LiveNewsCameras.com started on Super Tuesday with only a couple of feeds focusing on the Republican and Democratic candidates. What started as a humble newsroom experiment has earned the participation of ABC, CBS and NBC stations.

Using Mogulus, the site also features a livecasting moderator who helps us navigate through the available and upcoming content. And media isn’t truly social if it’s not portable. You can also embed “the moderator” on your site, blog or social network profile and also interact them them and other views in real time.

It’s a unique destination as it mostly publishes raw, unedited video. For example they’ve been streaming the presidential candidates live every day, sometimes two or three times each day as they tour the country. No one else is doing that.

They’re also working on providing live video of the Pope’s visit to America funneled from several different television stations. Again, they’re the only source to obtain raw feeds of the Pope’s travels at every possible opportunity.

What this really means, is that as in any form of social media, LiveNewsCameras can take a local voice or view and create an international audience for any story.

I spoke with Andrew to learn a bit about the future of LiveNewsCameras, “We believe that ‘live on the scene on any screen’ is the future of news coverage. The team at LiveNewsCameras is seeing a dramatic surge in the number of newsrooms that are using new technology to stream video live. This trend is only going to accelerate with mobiles that can stream video. Soon everyone will be able to stream live video and LiveNewsCameras.com is going to be the one place that helps you find it while it is happening.”

As the site adds additional major markets, LiveNewsCameras.com becomes more pervasive and definitive in how news is broadcast and viewed – but this time, the world is watching, on the Web and not in the living room.

2 COMMENTS ON THIS POST To “Local Broadcast News Goes Social”