I’ve been observing Dan Zarrella‘s work from a distance for some time and this is the first post dedicated to his work. However, he is someone whom I also hope to collaborate with in the near-term. 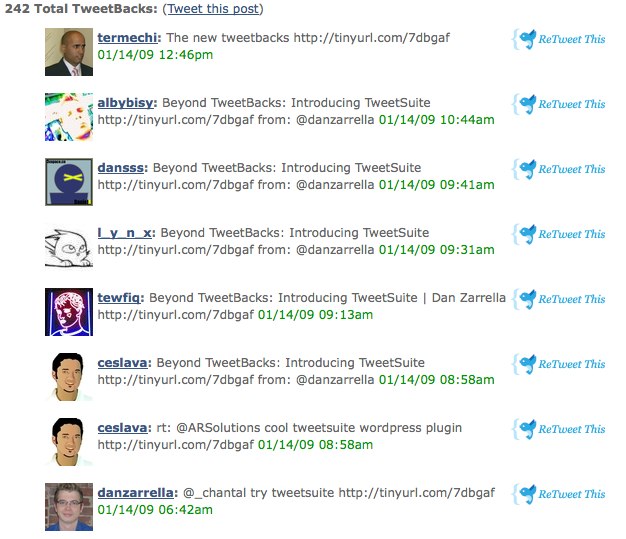 TweetSuite also offers the ability for people to directly tweet the post from your blog as well as retweet (RT) the specific tweets listed in the tweetback directory.

The suite provides several widget options to showcase most-tweeted posts, recently-tweeted, and the most favorited tweets.

It’s the seamless fusion between the blogosphere and twitterville, tying conversations across two of the most prominent properties defining the Social Web.

Zarrella’s work is poignant as it is timely. The conversation continues to migrate and evolve beyond the blogosphere and Twitter is the catalyst for the organic and rapidly multiplying interaction within micro communities. Facebook, FriendFeed, among others are also fueling the proliferation of distributed conversations and tools such as TweetSuite centralize dispersed dialog into one central location for context and perspective.

– The Poetry of Social Networking to Court Customers and Invest in Relationships
– Top 40 Must Read Posts on PR 2.0 in 2008
– Twitter Tools for Community and Communications Professionals
– The Socialization of Your Personal Brand Parts I – III
– In the Social Web, We Are All Brand Managers
– The State of Social Media 2008
– The Social Revolution is Our Industrial Revolution
– The Essential Guide to Social Media
– The Social Media Manifesto
– Introducing The Conversation Prism
—