The socialization of media is as transformative as it is empowering. As individuals, we’re tweeting, updating, blogging, commenting, curating, liking and friending our way toward varying levels of stature within our social graphs. With every response and action that results from our engagement, we are slowly introduced to the laws of social physics: for every action there is a reaction – even if that reaction is silence. And, the extent of this resulting activity is measured by levels of influence and other factors such as the size and shape of nicheworks as well as attention aperture and time.

The word influence as well as the individuals referred to as new influencers are elusive in terms of standard definition. Finding a common understanding and meaning is easier said than done. Influence itself is undergoing reexamination to better understand the diversity in perceived and actual social capital and the effects of conversations across first degree social graphs and across the social graphs of those connected across each degree (friend of friends and so on).

To help, I drafted a working definition to address influence and influencers as slightly modified from its longstanding definition in standard dictionaries.

Influence is the ability to cause desirable and measurable actions and outcomes.

As everyday people flirt with reach and impact, the question becomes, do they hold the same potential to cause effects similar to those of traditional influence and connectedness, for example celebrities, industry or political leaders, media properties and favorite brands? Or does social media represent the equalization of influence? One thing is already clear, influence is not popularity and popularity is not influence. According to research, size does not matter.

Defining influence is just the beginning. Understanding perception and expectations around influence and influencers helps us identify where we need to focus time on education and innovation.  This month, I partnered with Vocus to run a formal study on influence. As a result, 700 business leaders, entrepreneurs, and marketing professionals contributed to the report, which is available now as a free download.

I’ll share some of the observations and insights here…

79% of all panelists resided in the United States.

1% were divided across the Middle East, Australia, and South America.

Of those who participated in the study, marketing represented the largest group at 35% with Public Relations following at 28%. Social Media earned a spot in the top three with 17%

The experience was diverse, with 69% identifying themselves at the director level or above. Perhaps a pleasant surprise or simply just surprising, with 30%, the largest group of individuals who participated were at the executive level, including CMO, CEO or owner. Senior level, directors and program managers followed with 25%. At 19%, mid-career, account supervisors and account managers followed with the third largest group.

For this study, we received a well rounded response of divergent organizations. Corporations accounted for the largest sampling with 33%, which edged slightly ahead of agencies (marketing, PR, advertising, social media) with 32%. Next, self-employed/freelancers accounted for 14% of all responses with non-profit/trade associations checking-in with 12%. Education represented a healthy 7% followed by government with 2%

Participants scattered the business landscape, with a majority (42%) focusing their efforts in businesses that are generating less than $1 million. 19% responded on behalf of companies earning between $1-5 million. 15% work for organizations generating between $6 and $50 million. Businesses with over $1 billion in revenue represented 9%.

However, the insight is in the commentary. To help convey the perception of each, here are the words of participants for or against the difference in influence and popularity…

“Popularity is just that people like you. influence is when people listen to you.”

“Usually, the most influential things are the most popular.”

“Maybe they aren’t equal, but there is certainly a strong correlation.”

“But … one definitely bleeds into the other. More popularity = more visibility = more opportunity to influence”

When asked if a correlation exists between an influencer’s reach and their ability to drive action, 84% said yes.

If we highlight a quote from the previous question, Lady Gaga and Bono are clearly two very popular people, but in the eyes of one particular panelist, Bono was clearly more influential. To shed a bit of light on the matter, we have to visit the history of Bono’s career. Over the decades, he has cultivated his community to expect personal views, experiences, and requests for help in and around his music and performances. Essentially, he has groomed his “followers” to take action and as a result, he has caused action.

Now, as we see, Lady Gaga is the living example of someone who is attempting to convert popularity into influence…and hopefully action. Recently, she led a charge to help repeal “don’t ask, don’t tell” in an effort to stop the military’s gay ban. I believe that the shift from popularity starts with intention and activation.

To help us gain greater insight into the thinking behind the responses, let’s examine some of the commentary around the subject…

Reach Does Not Drive Action

“A person can have only a few contacts and greatly influence just those few.”

“The farther the reach, the greater the ability to drive action.”

“It’s certainly not a perfect correlation, but it definitely exists.”

If the previous question assumes that reach is necessary in order to influence action, our next question represents a possible reversal in thinking. 57% believe that an individual with a tightly focused network of the 3Fs (friends, followers, and fans) would have a more measurable effect on outcome over someone with a much larger number of loosely connected friends, followers, and fans (36%).

Understanding the characteristics of influence is as important as studying influence itself. We asked our participants to rank a set of contributing factors that make a person or brand influential, where each number could only get used once.  As you can see, the numbers appear greatly divided, but also united.  5=best.

40% ranked “depth of relationship” as their top choice.

If we combine 4’s and 5’s, we see similar results, but with a difference in hierarchy.

90% attribute influence to the quality or focus of a network

77% believe that the number of RTs and shares establish influence

76% assign the depth of relationship to influence

The ability to drive traffic ranked 7th with 75%.

Why we follow a person or organization says more about the mechanics for influence than we may imagine. Again, we asked those who participated in the study to rank the reasons they follow a person or company…each number could only appear once. 1=best.

If we add 1’s + 2’s together we can see the nuances, the “dots” that define the picture through pointillism.

43% focused on the personal connection

Thought leadership enters the top 3 in this perspective and as such, becoming a thought leader and ultimately an influencer, is earned through the creation of valuable content and the cultivation of communities to take action.

Earning Influence, One Way or Another

If you could choose one, single most important action a person or brand could take to increase influence online, what would you choose? In this case, content ranks at the very top. And while content might appear as king, compelling content is defined by context and relevance. Only the content that connects with individuals is worthy of not only consumption, but also sharing.

In any new landscape, metrics are the waypoints that validate our journey on these uncharted paths. To assess the meaningful actions that equate to success, respondents graded several criteria…each number again could only make one appearance. 1=best.

There’s a sense of irony here in that almost one-third say “an action” is the most important metric, yet just more than one-third also said it’s the least important.

Action ranks as a top metric for success with 37%

Page views is second as a success metric with 36%

When we examine the mean average for each, we see a slightly different hierarchy…

When defining success, it’s clear, social media and influence is not governed by a one size fits all approach. Social media experiences are personal and therefore, they’re unique for every organization. We can not measure what we do not value however, and as such, success must be defined upfront and appreciated as it’s realized.

Money Can’t Buy Happiness, But Can it Buy Influence?

A truly fascinating question often begets unexpected answers. Of those polled, 57% claimed that they would pay an influencer to help drive actions or outcomes.

To get a better understanding of who would pay for the leverage of influence, we broke out the question by industry…

Search/SEO contributed to the top category for “yes” but they also represented the smaller category of participants overall. As advertising pays its way to prominence as a matter of practice, it’s no surprise to see it rank among the top with 78% yes vs. 22% no. Although, in advertising, we’re seeing a dramatic rise in the fusion of paid and earned media or what I refer to as Hybrid Theory.  Marketing followed with 61% yes vs. 39% no. Social Media and PR tied for 5th, behind “other” with 52% yes as opposed to 48% no.

For those champions looking to either seek advice or approval from decision makers within your organization, look no further than the CEO or upper management. Each accounted for 63% and 60% respectively in their willingness to pay for influence.

Apparently it’s true, while money doesn’t grow on trees, it does grow on tweets.

In conclusion, we asked panelists to submit their working definition of influence in 140 characters or less. A word cloud was then generated to amplify the most common ingredients.

The first word that seems to have everyone’s focus is “ability” followed by “action” and the new 5th P of Marketing, “People.” Examining the other words reveals that we have before us, the recipe for influence and it might look a bit like this…

Now try to string together a working definition of your own based on this research.

In the end, it’s our job to become “the influencer.” We owe it to our communities of customers, prospects and the people who affect their decisions to lead by example. Then and only then, can we master the ability to influence the influencer.

If you’re looking for a way to FIND answers in social media, consider reading Engage!: It will help you… 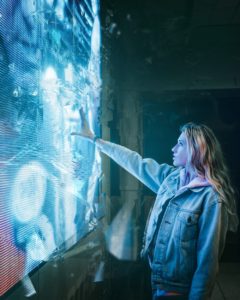 175 COMMENTS ON THIS POST To “Exploring and Defining Influence: A New Study”