The First Amendment of Social Media: Freedom of Tweet

The First Amendment to the U.S. Constitution guarantees freedom of expression from government interference. While it is within our right to say what we think without fear of prosecution from our Government, freedom of expression in social networks however, is something altogether different. In the court of public opinion, your words can and will be used against you. But what works against us, also works for us.

While the egosystem is seemingly rife with unintelligible chatter, it is, in and of itself, revealing a new direction for our culture and society.  In this brave new world of altruism and self actualization, the lines that divide offline and online personae and experiences blur into one real-time, real world lifeway. Indeed, the impact of social and mobile technology is profound. As a result, human behavior has diverted towards a very public genre of expression, discovery, and extroversion, and packaged in brevity and frequency.

We are beguiled by this new found freedom of speech, sharing a communal desire to find our voice, protected by a false sense of security. The statusphere and blogsphere are rich with perpetual observations and declarations, but we lose something in translation. While content was once king, in social media, where character and word count is precious, context ascends to the top of the ranks. In short form, context is elusive and in order to convey intent and desired outcomes, one must master the art and science of storytelling and influence. We must realize that what we think we’re saying might not convey as desired. There’s a difference between what we say and what is heard. And now with social media, intention is often eclipsed by abbreviation.

27-year old accountant Paul Chambers learned about context and character the hard way recently when he tested his Freedom of Tweet. In January 2010, Chambers Tweeted, “”Crap! Robin Hood airport is closed. You’ve got a week and a bit to get your shit together otherwise I’m blowing the airport sky high!!”

He was later convicted and fined. In November 2010, he lost his appeal. What was intended as a joke, in hindsight, is now vividly clear to see just how things can be taken out of context – especially on Twitter. Yes, his Tweet was in poor taste. His action was the catalyst for a national example of prudence. But, the Twitter community stood by Chambers and their Freedom of Tweet by uniting under the hashtag #IAmSpartacus upon learning his appeal was lost.  With homage to the film, Spartacus’s fellow gladiators demonstrated unanimity by declaring, “I am Spartacus.” Twitter denizens showed solidarity with Chambers by repeating his Tweet to the point of topping the Trends in Twitter for an entire day.  While many stand united on Twitter, the reality is that Chambers lost his job and still faces conviction and a significant legal bill.

Judge Jacqueline Davies said of the Tweet “It’s menacing in its content and obviously so. It could not be more clear. Any ordinary person reading this would see it in that way and be alarmed.”

Inner monologue and filters usually prevent us from uttering words that could haunt us or worse, harm us. Social Media erode these filters enticing us to share in public what might be better shared with discretion. Perhaps our screens shroud us in a protective light.

Either way, there is no shortage of stories where students are dismissed as candidates based on what college admissions officers discover on social networks. Accordingly, job candidates also lose opportunities without realization as HR managers discredit them based on what they share in social media. We’ve also read many stories where employees are fired for lambasting customers or  bashing management.

Our digital shadows work for and against us. When it comes to matters of education and employment, perhaps it is not wise to test our Freedom of Tweet unless it is advantageous to do so. In a groundbreaking case however, we see that the First Amendment of Social Media may in fact, officially take shape.  An employee who criticized her employer on Facebook was recently fired for doing so. Now the National Labor Relations Board accused American Media Response of illegally firing her.

According to the National Labor Board, Social Media are essentially digital water coolers. Acting General Counsel Lafe Solomon expounded, “This is a fairly straightforward case under the National Labor Relations Act — whether it takes place on Facebook or at the water cooler, it was employees talking jointly about working conditions, in this case about their supervisor, and they have a right to do that.”

This landmark case will serve as precedent for the coming flood of cases to consume courts.

While common sense is uncommon, it seems that in this case, at least employees are covered even if judgment lapses. The National Labor Relations Act gives workers a federally protected right to form unions and it prohibits the punishment of workers for discussing working conditions or unionization.

This significant move by the NLB triggered a “lawflash” by Morgan, Lewis & Bockius, a law firm with a large labor and employment practice representing hundreds of companies, “Employers should review their Internet and social media policies to determine whether they are susceptible to an allegation that the policy would ‘reasonably tend to chill employees’ in the exercise of their rights to discuss wages, working conditions and unionization.”

In case you glossed over the above paragraph, it essentially says that your social media policy might open up the organization to potential complaints, suits, and liabilities.

Yes, social media is the democratization of information. We’re inspired to express ourselves and are rewarded every time we share a bit of who we are and what moves us with the recognition and validation of response and connection. But with this new voice and platform, we must also embrace a more informed era of consciousness. Now more than ever, vigilance becomes a virtue. While this so-called First Amendment of Social Media is written and tested in real time, it is up to us to say and do the things that share not only who we are, but also who we want to be personally and professionally. 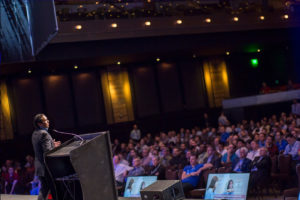 "To practice any art, no matter how well or badly,

"We rise to great heights by a winding staircase o

We all want to stay informed in these uncertain ti