Home » Articles » Business Growth » Picture This: When Consumers Have Questions, Do Brands Have Answers?
Go Back

Picture This: When Consumers Have Questions, Do Brands Have Answers?

I pay attention to emerging technology and trends on a daily basis. While I track many networks, tools, and services, I take the time to share those that appear to gain traction or offer interesting prospects for tomorrow’s business, today.

Two such services are quickly becoming the darlings of the blogosphere and brands alike, Instagram and Quora. Not a day passes us by where someone isn’t analyzing Instagram’s rise to imaging stardom or Quora’s domination of social engagement around questions and answers. Did the world need another imaging application? Probably not. Do consumers need another question and answer site? Hardly. Instagram and Quora, however, appear to have executed a “thin edge of the wedge” strategy, which is akin to the “tip of the spear” strategy where the services attack a small problem first and then expand once traction and momentum are underway.

Instagram wasn’t the first service to help you share pictures from your mobile device to your social graph. Services such as Twitpic and yfrog connected pictures to the Twitter stream. With Facebook’s mobile app, users could simply upload pictures to their Wall. Instagram however, solved two small challenges with an all-in-one app. It became the focal point of visual sharing. Rather than take a picture and then upload socially through a separate service, Instagram became the dashboard for capturing, editing, and sharing the image without leaving the app. And, Instagram served as an integrated distribution network connecting users to their respective egosystem including, Twitter, Flickr, Tumblr, Posterous, Facebook, and Foursquare. The answer to what’s next lies in the company’s business plan, most likely described as the wedge strategy. Or, the answer could already exist in Quora, the social Q&A network.

Quora seems to baffle the sharpest of the pundits. Essentially it is a question and answer network, not unlike Yahoo Answers or Mahalo Answers. But, the fledgling service solved a couple of problems very well that existing solutions and budding entrepreneurs neglected to see. Much in the same way Foursquare applied game mechanics into geolocation and Facebook introduced the social effect into the News Feed, Quora is designed to engage, challenge, educate and reward its users. But that’s not all. The foundation for the questions and answers are driven by a hierarchy and social ranking, much like Twitter and blogs. The number of followers, following and total mentions is prominent for all to see and judge.

Quora evokes the essence of social capitalism and in the process, introduced a new category of content creators. The system was initially closed, and through a strategic round of private beta invitations, the early rounds of users such as digerati, silicon valley elite, bloggers, celebrities, et al, set the stage for exclusivity as well as focus. Those on the outside wanted in and those on the inside desired recognition. I am not name dropping, but I am making a point. I was introduced to Quora by Ashton Kutcher. And, when I sat down recently to discuss Quora with uber blogger Robert Scoble, his response was as telling as it was validating, Quora is hot because, “all of the cool kids are using it.”

The thin wedge of Quora’s strategy may already have traveled further from the left to the right than Instagram. As new users are invited into Quora, the game mechanics seem to only grow in prominence. People are investing in asking and more so, answering questions to boost social capital in an uncharted and unconquered network where the reward is distinction and stature. If it’s one thing that I’ve learned over the years of studying social media, business, and the pursuit of influence, it’s that we are competing for the moment in order to earn and maintain a semblance of relevance. For businesses struggling to gain traction through Likes, RT’s, comments, clicks, friend and follower counts, the moment for which we compete, never really comes. It is perpetual.

The reality is this, Quora and Instagram are inviting participation among brands as they experiment in earning relevance.

While brands are currently not invited to the Quora party, listening and monitoring are important within Quora if it is indeed where your community is asking and answering questions. Like Yahoo Answers and Mahalo Answers, answers to brand related questions are already populating the top of search results in Google.

But why Quora? Robert Scoble eluded to the value of the network earlier. The community as it exists today is rich with influencers. Their perspective is worthy of attention. If for nothing else, insight into the perception and experiences of noteworthy individuals can help inspire future experiences through adaptation.

Brands can follow topics related not only to their company, but also their markets. For example, there are hundreds of questions related to Apple in Quora right now, 335 of which are open. If we take a subset of Apple’s business and follow the topic around “tablets,” we would see that our time (defined by any number of tablet manufactures) would yield a great deal of insight.

Even though brands aren’t invited to the party, brand representatives are already listening and responding to important questions related to their company or market using their personal accounts. This does two very important things. 1) It allows for individuals to build social capital because of the caliber and thoughtfulness of the responses they share. 2) Through transparency, brands are the indirect beneficiary as these representatives establish goodwill with each insightful and helpful answer.

By the way, if you want to continue the conversation on this topic, it should come as no surprise, that a question already exists…and it’s awaiting your response.

On the other hand, Instagram is already attracting brands into the popular mobile imaging network to help visualize their stories. In November of 2010, National Geographic was amongst the first to demonstrate how a brand’s image could quite literally tie to images within a mobile photo sharing  network bound by imagery. Since then, CNN, Grammys, NPR, NBC News, Playboy, and Pepsi signed up for Instagram. When Starbucks introduced its new logo recently, the company did not wish to repeat the Gap’s social backlash. Instead, Starbucks shared the logo across the social Web, Instagram included, to seek feedback.

NPR uses Instagram to not only extend the reach of its stories, but also tell stories through modern form of photojournalism. In fact, media certainly has a play here and in any other active imaging network. To learn more about brands using Instragram, you might want to watch this thread as it unfolds on, you guessed it, Quora.

We’re early on both fronts, but these trends are inciting notable activity on both sides of the brand equation. It’s not just businesses that gain from the intelligence and community within each network, media organizations can also keep their fingers on the pulse of not just new, but also emerging networks that can modernize and reinvigorate news distribution networks.

The networks that gain greatest prominence in these times are those that people choose to support. As such, it is up to businesses and organizations with a story to tell and those with true intentions of community to survey the horizons for the next opportunity to earn relevance. 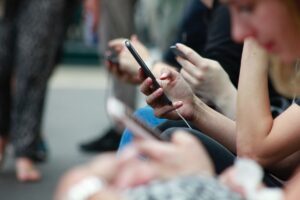 46 COMMENTS ON THIS POST To “Picture This: When Consumers Have Questions, Do Brands Have Answers?”