All eyes are on innovation hot spots around the world. But it’s not just about hot startups, soaring investments, and mind-blowing exits, it’s about the series of common traits that inspire entrepreneurialism. Vision, determination, creativity, salesmanship and the relentless pursuit of communities is something that not only applies to entrepreneurs but also intrapreneurs within small and large organizations. The truth is that in times of innovation, everyone must think about what we do today and how it can be done differently tomorrow.

One such story takes us from Paris to San Francisco on this episode of Revolution.

For those who follow emerging technology, Loic Le Meur is a household name. In 1999, he sold his first technology company RapidSite to France Telecom. Following a successful exit, he jumped back in with Tekora in 2000. In 2003, he purchased Ublog, a French blog hosting company and merged it with Six Apart in 2004. He wasn’t done yet however. He started Le Web, a conference focused on the intersection of the web, business and society and today attracts 3,000 people from 60 counties every December in Paris.

It is his move to San Francisco in 2007 to launch Seesmic where his story gets more interesting. After a few pivots, Loic recently refocused the company on Seesmic Ping to help social media users centralize and more effectively manage content publishing on social networks. And Seesmic was recently acquired by HootSuite. Congrats Loic!

His “never say die” philosophy and the ability to see new opportunities is something we can all learn from. 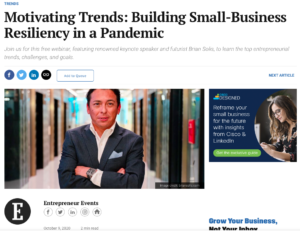 “Leaders are fascinated by the future, restless