Guest post by Ekaterina Walter (@ekaterina), a social innovator at Intel and the author of “Think Like Zuck: The Five Business Secrets of Facebook’s Improbably Brilliant CEO Mark Zuckerberg”

This question has been of great interest to investors since the 2012 IPO that saw the company valued at $100 billion. Facebook already has 1 billion users worldwide and 44% of all internet users have a profile. Facebook pages make up one in five page views on the internet.

So is there a limit to this growth?

4 in 5 users are currently outside the US and that is where Facebook will see its biggest growth in sheer numbers. India already has 51 million Facebook users, but with a population of over 1 billion, the potential for growth is massive.

But growth cannot continue indefinitely: around 35% of the world’s 7 billion people have access to the internet, and China has blocked use of the site for now. The number of Facebook accounts could double, even triple as internet usage continues to grow, but there is still an upper limit.

So if there is a limit to the number of people who can have Facebook accounts, how can the site continue to grow once it reaches saturation point?

“[Facebook] is shaping a broader web,” says Facebook’s CEO, Mark Zuckerberg. “If you look back for the past five or seven years, the story about social networking has really been about getting people connected… But if you look forward for the next five years, I think that the story people are going to remember five years from now isn’t how this one site was built, it’s how every single service that you use is now going to be better with your friends… People are really going to look back and say ‘wow, over the last five years all these products have now gotten better because I am not doing all this stuff alone, I am doing it with my friends’. That’s what I am most excited about.”

The answer is the type of growth, not the scale of growth. Mark’s dream of connectivity means that Facebook will become more deeply embedded into the internet experience; users will continue to share more and more about their buying, entertainment and networking habits, and be able to feed back more information to the brands that supply them.

Farhad Manjoo, writer for FastCompany.com, predicts Facebook ‘will never sell your personal data to anyone–that’s one thing users would never accept. But it doesn’t need to; there are potentially huge markets for aggregated bundles of user info.’ As more and more apps are integrated onto Facebook there is a vast and growing source of data for the way users interact with everything from ads to pages to entertainment, with extensive demographic information on themselves and their networks. And Facebookers aren’t just clicking, they are actively commenting on and discussing what they are using. All this means greater revenue potential for Facebook, but also more relevance for users: no-one wants to be pressured by irrelevant ads, but they may want to know about the interests and recommendations of their friends.

8 out of 10 US companies now have Facebook pages, but the recent introduction of Facebook’s Global pages shows that the company is looking outside of the US to achieve the same sort of figures. Non-personal profiles represent an enormous area of growth for Facebook and with greater feedback into people’s Timelines when friends Like or Comment on brand profiles the potential for companies to reach new audiences is enormous.

Beyond Farmville, there is growing potential for third party apps. With everything from product purchasing to ticket booking, entertainment viewing and social interaction, the amount of time people spend accessing and sharing information via Facebook could soar. Beyond this, there is the opportunity for f-commerce, which in 2011 brought in $557 million, a fraction of their total income of their $3.7 billion. Facebook takes 30% of revenue from third party apps that use it as a platform for selling and is only just starting to exploit the possibilities.

60% of Facebook users are accessing the site through mobile devices but Facebook has only just begun to explore the potential here. There are two major strands: one of revenue as mobile use is not yet monetized through advertising, and one of the opportunities for geo-located apps to create a whole new Facebook experience for users to interact with the world around them. The potential for brands is particularly exciting as marketing could be done in real time as people move around a Facebook-activated environment.

Paul Adams, the Global Brand Experience Manager at Facebook, describes the shift from the way people are using the internet and the move towards greater social networking: “[The web is] moving away from being built around content, and is being rebuilt around people.”

Facebook can continue to grow, but the definition of growth might not be a traditional one. As people spend more time on the network interacting with the world around them their experience of Facebook will change. There may be a limit to the absolute number of users, but Facebook’s growth can continue to penetrate more areas of people’s lives, and it is up to Mark Zuckerberg and his team to set the limit for how far that can go.

book facebook hack hacker way mark+zuckerberg think like zuck zuck
« Previous PostFrom the Big Screen to the Little Screen: The evolving relationship between TV and search
Next Post »Social media is not your saving grace: Experiences should first be defined and supported 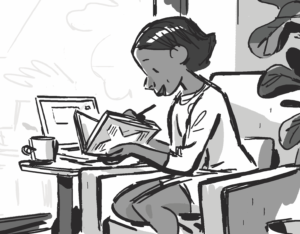