Experience Innovation – Designing for the X Factor in Customer Experience Coming up in Silicon Valley during the 90s and early 2000s was special for a geek like me. I moved to Northern California from LA in 1996. Tech and startups were at the time fledgling in Los Angeles but still exciting. I would later return to help catalyze the startup ecosystem. My goal at the time was to plug into the startup garage capital of the world. By then, there were already storied landmarks that one would have to visit. The HP garage (considered the birthplace of Silicon Valley), the Apple garage, the Google garage, et al.

But it wasn’t just garages. There were sprawling tech campuses that were already reshaping the Bay Area…and the world. Among the many, one of the iconic landmarks in the rise of Silicon Valley is the Xerox PARC innovation center. This is afterall, where Steve Jobs famously witnessed (and marketed) the GUI (graphical user interface), WYSIWYG (what you see is what you get) editing and mouse techologies for the launch of Lisa and Macintosh and the personal computer market.

I was beyond thrilled, when I was invited to PARC to present on the topic of “Experience Innovation.” It was not only an honor, but also validation of my years of work, that I could contribute something to epicenter of innovation.

I wanted to share that experience with you here. 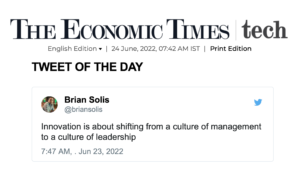