Unfortunately I had to miss what turned out to be an amazing party. I had to sneak-in one last camping getaway with the family before the end of summer. Laurence (Lo) Toney, VP Marketplace Operations, art.com, attended TechCrunch 7 and was gracious enough to provide us with his wrap-up report.

It was labeled the Web 2.0 party of the summer – Michael Arrington’s TechCrunch party or TechCrunch 7 for those counting. This time the partygoers did not cozy up in Mike’s Atherton abode. Instead, David Hornick of August Capital played co-host to Silicon Valley’s movers and shakers, as the event was hosted at August’s Sand Hill Road offices.

TechCrunch parties have a reputation for attracting a crowd and are typically a must-attend event for the digirati. This time it went to another level with over 700 attendees, who were fortunate enough to RSVP on the wiki before it locked up, receive a personal invitation from Mike, buy tickets on eBay, or guess the winning bid for the tickets sold on eBay. I arrived at August at about 7.20p and the party was already in full gear with most of the parking spaces full and a line to register. Once inside, I ran into Mike and Gil Penchina, ex-eBayer and currently CEO of Wikia, on the terrace. Gil kidded Mike by telling him that next time he should use Wikia if he needs a place for people to RSVP. I knew that I was in the right place when I ran into Oliver Muoto, co-founfer of vFlyer, who was a fixture in the Web 1.0 days. I began to wonder if we really are in Bubble 2.0, but the feeling quickly went away after a quick scan of the food being served, which did not include shrimp. [Please note that shrimp are not an indicator of a top in the market, but they did accompany the market top in 2000.] Jessica Guynn from the SF Cronicle

The mood was jovial as all attendees chatted under the Silicon Valley sky as the sun set in the distance. There was so much networking going on that many of the partygoers mentioned that they were burned out from marathon networking. I spent time meeting new people as well as catching up with old friends. I spent time chatting with Auren Hoffman, CEO of RapLeaf, who brought me up to speed with the latest developments with his company. For those who have not used RapLeaf, I think that it is one of the most interesting companies addressing the issue of reputation. As a former eBay employee, I always thought about the potential for feedback outside the four walls of eBay, and RapLeaf is leading the charge on the market opportunity for portable feedback across commerce and community. Jessica Hardwick, CEO of SwapThing, on left with Mital Poddar head of Marketing

I had the opportunity to meet Prosper Nwankpa, co-founder of xuqa.com. For those who might remember, xuqa.com originally launched as another competitor to MySpace, but after xuqa.com received an investment from BV Capital the company recently re-launched with a contest theme. People can now compete for cash prizes based on their popularity and become Xuqalebrities. The contest approach appears to be working, and the founders were accompanied by two of the top models from the most recent contest. The next contest is for the best bands in the xuqa community – it seems like this is going to be a popular theme moving forward. Later in the evening, I also met the founder and CEO of SwapThing, Jessica Hardwick and her Head of Marketing, Mital Poddar. I enjoyed talking with them and learning about their company. Similar to zinafish, SwapThing is all about trading things with others in their community. It seems to be working based on the stats that Jessica rattled off to me. The most interesting stat was the fact that only 16% of the items are traded for like items. It seems that this is an area that will grow over time as we begin to view items as temporary possessions that can be sold on eBay or craigslist with the proceeds used to buy the latest and greatest, or traded on sites like SwapThing for something from a totally different category. It was also nice to catch up with my friends from Kaboodle. While I was with eBay, I created a deal with Kaboodle to create a partnership for the eBay community called MyCollectibles, which allows people to show off the items that they are passionate about. Kaboodle is the leading company in the so-called social shopping space and is doing some very exciting things to change the way that commerce happens. Man of the moment, Mike Arrington from TechCrunch on left with Gil Penchina from Wikia

There were so many people at the party that I cannot even do the list justice, so I will simply provide a laundry list of everyone that I caught up with and noticed.

Other people that I caught up with include:
David Ulevitch the CEO of OpenDNS
Peter Shin of Mobissimo
Guy Kawasaki of garage ventures
Alan Gunshor, CEO of catzilla
Matt Marshall of siliconbeat.com
Justin Smith of sitepen
Jessica Guynn of the SF Chronicle
Alex Welch, CEO of Photobucket
Alix Holder and Brian Dixon of profilelinker
Steven Lurie, VP Business Development with Browster
Joanne Wan of STIRR – she gets my vote
Marc Canter, CEO of People Aggregator Speaking of Nick Douglas, he was able to sneak into the party, even though Mike said Nick was not invited. Someone even took a picture of Mike shaking hands with Nick – perhaps the friendly feud is over? Time will tell…Nick also promised $200 to anyone that streaked through the party. Apparently, it did happen as some guy streaked earlier during the event – glad I missed that one. Thanks Mike and David – looking forward to the next one. For more images from Techcrunch, visit my flickr stream or the group stream.

Laurence Toney is the VP Marketplace Operations with art.com. He is responsible for the operations and execution of online initiatives to bridge the world of emerging artists with the world’s art consumers. Before art.com, Laurence was the Director and General Manager of eBay’s Collectibles Business Unit (CBU). Please click here for his complete biography. 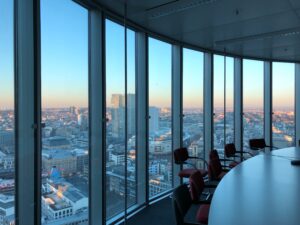