In August 2007, I wrote about a public discussion including Chris Messina, Stowe Boyd, and myself on the value of creating channels within Twitter. Its an important discussion because Twitter was and still is representative of a powerful form of emerging media – but it’s missing something.

Twitter leads the way for other forms of MicroMedia and represents a white hot medium for connecting people in a way that no one would ever believe possible.

Along with its growth and continued rise in global popularity, the noise level in Twitter is also deafening.

But up until recently, the conversations taking place on Twitter was progressive yet finite. While some discussions thread into brilliant movements, most vanish into the history books…except in this case, there aren’t any history books per se.

In the world of Social Media, listening to online conversations is the keystone to genuine participation. What if you could find the discussions that were important to you?

There are now several ways to find relevant topics and join productive conversations on Twitter. This is especially important, if you are a representative for a company and/or brand seeking solutions for effectively listening to the community in order to help them answer questions or provide them with useful information.

Suddenly the most powerful form of MicroMedia is now taggable and searchable and allows Twitter users to create channels or topic streams similar to the functionality that has existed in Jaiku for over a year – although at the moment, Jaiku’s channel product is much more elegant and friendly.

The whole idea here is that you can tag your tweets in a way that they’re discoverable by those who seek similar content. Remember though, you have only 140 characters to make an impact.

In order to have your hashtags indexed, you have to add the hashtags bot, @hashtags, to their twitter account.

Tags need to be one word for now. So for example, instead of tagging #brian+solis or #brian_solis, it’s simply #briansolis. To search it for relevant tags, bookmark http://www.hashtags.org/tag/. Continuing the example, to search briansolis, the URL would look like this, http://hashtags.org/tag/briansolis/ and the result:

Twemes, at the moment, is a friendlier solution for searching tags.

You can also search by the most popular tags, recently added, or monitor the river of every tag.

However, the community is split on whether or not #hashtags will take off and enjoy mass adoption. Many enthusiasts have expressed distaste to its aesthetic pollution to the Twitter stream, instead of seeing the contribution to the legacy of topics, channels, and keywords. At the very least, those you use hashtags should be strategic and thoughtful in what they choose to tag.

Twitter is also searchable outside of the world of #hashtags, which also substantially increases the value of content contained in the Twittersphere as it brings past tweets back to life.

Enter Tweet Scan, a basic search tool that operates similar to how you would naturally search in Yahoo or Google.

For example, if you’re searching for tweets related to Perez Hilton, simply type “perez hilton” into the search window and peruse through the tweets as you would via traditional search results. In this case, we see that Perez has some breaking news on Britney Spears via WeSmirch.com (an aggregated channel for entertainment and celebrity gossip and news produced by TechMeme’s Gabe Rivera.) 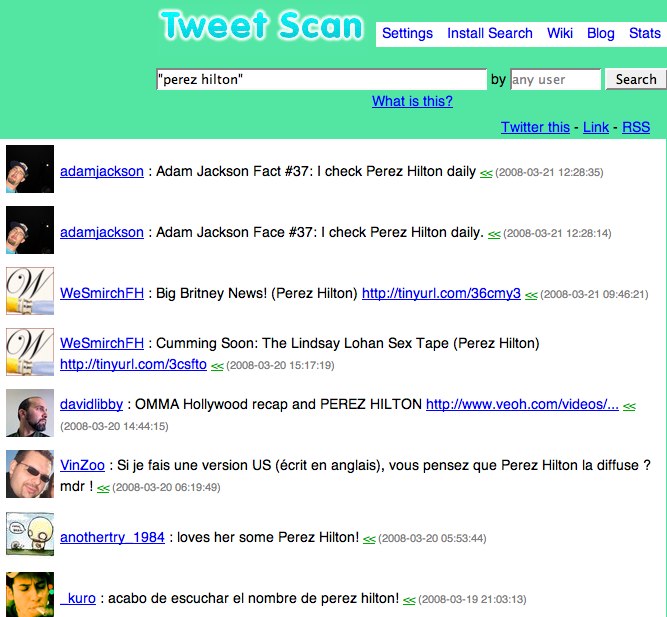 Twitter is now an even more powerful and important tool in the realm of Social Media in order to participate and listen to the online conversations that are important to you.

New services such as hashtags, Twemes and Tweet Scan empower us to shift from the typical broadcast mentality and limited group discussions to a rich conversational stream.

More about online conversations at ZDNet.

More tools for listening can be found at ReadWriteWeb.