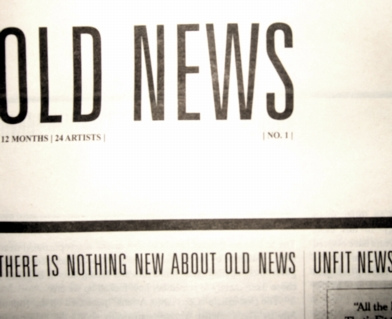 As a follow up to my post, “Extra Extra, Read All About It! Newspapers Respond to the Social Web,” new research emerges that documents the looming exit of print newspapers as a primary source of national and international news.

According to the Pew Research Center for the People & the Press, a new survey indicates that 40% of respondents claim the Internet as their primary source for national and international news, versus 24% in 2007. In comparison, 35%, up 1% from 2007, rely on newspapers and 70% count on television as their main source for news, down from 74% in 2007.

Perhaps the harbinger of things to come is embodied in the response from Americans under 30. A staggering 59% indicated that they get most of their news from the Internet, up from 34% in 2007. In the group, television tied with the Internet at 59%, but for broadcast TV, it’s a steep decline from 68% in 2007. As Dan Farber of CNET points out, these figures add up to more 100 percent because people have the ability to offer multiple answers.

Clearly, printed newspapers as well as television are under tremendous pressure to reinvent themselves in the social economy. It’s not just about the socialized mechanisms and channels to source and broadcast news however, a successful metamorphosis requires the creation of an active and enlivened community supported by a profitable business model.

As I’ve stated previously, through social networks, blogs, and micro communities, consumers have access to information literally as it happens. Their peers become sources for news and information, reinforced by social frequency and reverberation. Twitter, Facebook, FriendFeed, and other networks ARE emerging as trusted and oft referenced newsfeeds. And, they’re fueled by immediacy, brevity, and connectedness.

You can download the study as a PDF here.

6 COMMENTS ON THIS POST To “Newspapers are Old News”