Note: to bypass the background story and skip straight to the instructions for Twitter Bowl, click here.

In 2008, Jeremiah Owyang had a great idea to extend the conversation about Super Bowl ads from my living onto Twitter. Chris Heuer, Stephanie Agresta, Darryl Siry, Ben Metcalfe, Eric Gonzales, and I quickly supported the idea and set up a series of Twitter stations to kick things off. Josh Bernoff of Forrester analyzed 2,500 tweets and organized the results into an impressive ratings summary. That was the beginning of #superbowlads on Twitter.

This year, we will continue the tradition of rating the Super Bowl ads on Twitter, but with a small twist – one that hopefully makes Josh Bernoff’s life a little bit easier. Unfortunately Jeremiah and Shirley are returning from Hawaii, so I had a different idea to get us back into the game, while contributing and showcasing the results in real time.

This year, we’ve also rallied the support of Louis Gray, Guy Kawasaki, and Jesse Stay, founder of SocialToo. Since Twitter is rooted in public interaction and provides the ability to extend its functionality, I wanted to find a Twitter application that would allow us to not only monitor discussions and ratings related to #superbowlads, but also provide the ability to capture and present votes. This might be one of the biggest “social” focus groups to date…

SocialToo is a suite of productivity solutions for Twitter and other social networks. It’s most notable and unique feature is SocialSurverys, providing the ability to create elegant polls that can be shared across multiple networks (provides for automatic distribution through Twitter) and tracked in one central location for analysis. 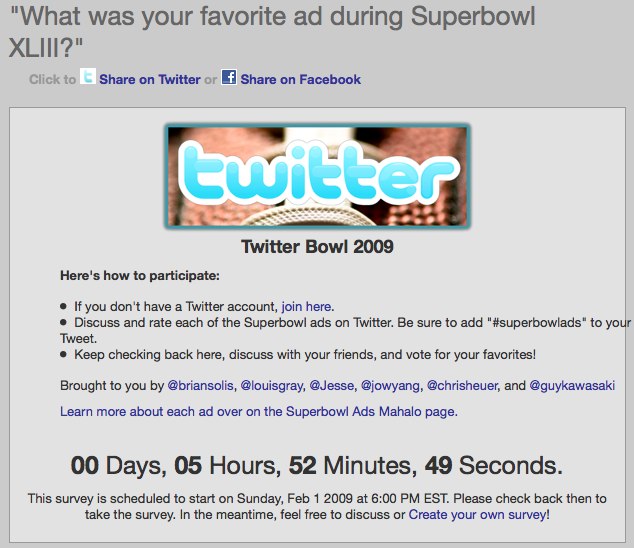 – Vote for your favorite ads here and share the following link with everyone you know (do so often): http://poprl.com/FmN

– Discuss and rate each of the Superbowl ads on Twitter. Be sure to add this text #superbowlads, to each Tweet. Doing so will automatically channel your updates into the main dialog hosted at SocialToo (below the survey).

Enjoy the game and follow the conversation. We’ll publish the final stats and compare the how Twitter compares to mainstream polls.