Contrary to popular belief, Twitter wasn’t the only story of 2009. Facebook skyrocketed to over 350 millions users in 2009 and continued its rise to global pervasiveness becoming one of the top visited sites on the Web.

As aspiring digital anthropologists and sociologists, we thoroughly enjoy and appreciate the trending topics readily available for review and analysis on Twitter. On Twitter, trends are defined and shaped by the shared interests published in the form of status updates that suddenly congregate and rally.

To close 2009, Facebook assembled its top trends to give us insight into the posting and conversational trends connecting social graphs.

Per Facebook’s year end post announcing the top status updates, we’re introduced to Memology, the study of how ideas, events, and information transform into memes and trends inside Facebook:

Status updates on Facebook help people understand their friends and the people around them–how they’re feeling, what they’re doing and what they’re thinking. In the United States alone, people on Facebook are sharing hundreds of millions of words every day, thousands per second, in status updates. When taken as a whole, these words offer a unique barometer into the issues, world events and thoughts that are connecting people.

In the tradition of year-end lists, we’re introducing Facebook Memology. “Memology” refers to the study of how “memes,” or new ideas and trends, are spreading on Facebook. For this year’s list, the Facebook Data Team mapped the top trending words and phrases in U.S. status updates for 2009.

Trending analysis is extremely fascinating as it tells us a lot about, well, ourselves. It is this activity defining the statusphere that allows us to revisit exactly what captivated us as well as which events and trends captured our attention.

To generate the list, Facebook examined the frequency of each phrase with length from one-to-four words. The team then analyzed important bursts in activity around words and series of words to find the key trends for the year. Because many words and phrases were correlated contextually, Facebook grouped some of them together to form the final list.

2. FML – A term used almost exclusively online and in text messages, FML usually expresses frustration, either playfully or seriously, where the “F” stands for exactly what you think with “M” and “L” representing My Life respectively. Facebook observed that many people expressed their exasperation in May and again in the Fall most likely representing the state of student dismay at either finals or school beginning again after summer. FML appeared most often on Mondays and Tuesdays.

13. Yard: As Facebook observes, “Yard” seems fairly uncommon and a trend that nobody would have guessed. Their explanation, “Hipsters’ moms and dads are also on Facebook, and these folks have yards that require some tending.”

15. I, is: Until March of 2009, our names appeared next to the status update and as a result, we tended to update our activity starting with the word “is” to form a complete thought or sentence. Upon elimination of the name’s proximity to the status box, the usage of “is” dropped off dramatically and usage of “I” doubled almost overnight.

Facebook’s definition of memology is interesting indeed. Perhaps most interesting however, is the comparison between Facebook and Twitter 2009 trends. 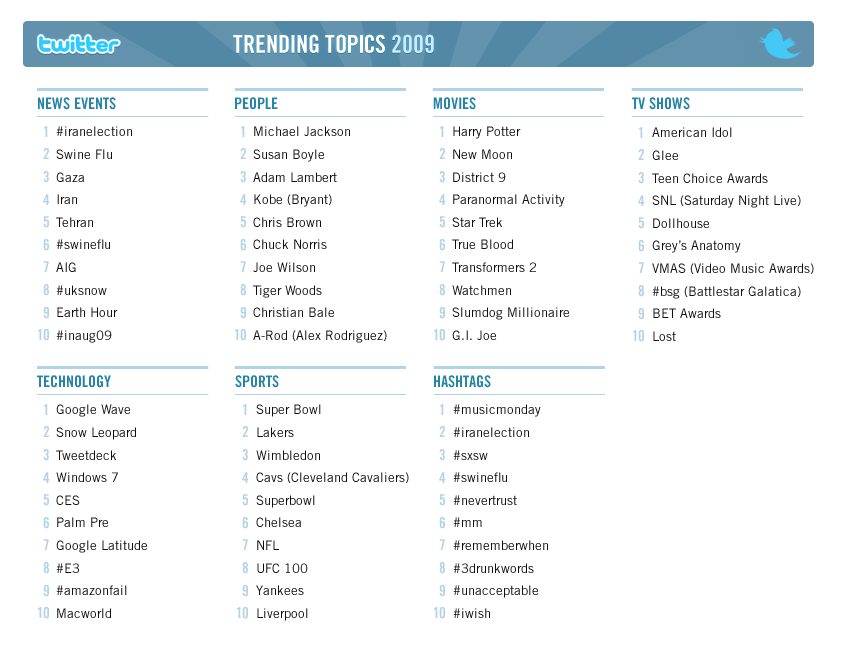 To close out 2009, I thought I’d share a few other interesting Facebook stats, which should provide a bit of motivation to increase your focus on Facebook in 2010.

2.5 billion photos are uploaded to the site each month

3.5 million events are created each month

There are more than 1.6 million active Pages on Facebook

Users
The average user has 130 friends on the site

On average, users spend more than 55 minutes per day on Facebook

Most users are member of at least 12 groups

About 70% of Facebook users are outside the United States

Over 300,000 users helped translate the site through the translations application

Every month, more than 70% of Facebook users engage with Platform applications

Over 500,000 active applications are currently available

80,000 websites have implemented Facebook Connect since its general availability in December 2008

Mobile
There are more than 65 million active users currently accessing Facebook through their mobile devices.