In Part Two of The State and Future of Twitter, we reviewed Promoted Tweets and the new advertising platform and metric system that will test and hopefully strengthen the “interest graph” that connects individuals around relevant subject matter and eventually the ads that they might find relevant. In Part Three, we are going to review the news and ideas that erupted during the Chirp conference as well as the new features that position Twitter as “consumption media” and how it will earn new users and simultaneously increase the activity and contributions of everyone.

Twitter COO Dick Costolo defined Twitter as a consumption medium, “Millions of people might read tweets either on the site, through clients or through widgets on external sites, but they might not author tweets.”

If Twitter adheres to the Technographics or Socialgraphics analysis of Social Media, Costolo is not only correct, but also vocalizing what many researchers are leaning about social media: even though it provides a democratized platform for participation, most registered users of social networks read updates and content instead of updating or posting content. Therefore, one could deduce that social media is, for the time being, in a state of mass consumption and not mass creation.

Along those lines, two major announcements hit the Web during the Chirp conference related to mass content consumption.

The Library of Congress

To date, billions of Tweets have contributed to the evolution of online societies and the digital cultures that would inevitably impact our culture in the real world. From global celebrations to controversial elections to natural and heart-stopping catastrophes to local events and personal achievements, the archive of Tweets indeed represents a generation fueled by the “me” in social media. And, with every Tweet and ReTweet, human communications, the way we form relationships, and media itself was and continues to be redefined. Twitter has evolved into a lens into popular culture that not only reflects behavior, but also influences it.

As part of the contribution, The Library of Congress can only include Tweets in its internal library for non-commercial research, public display, and for preservation, after a six-month delay.

Google paid to receive the full real-time Twitter firehose in December 2009 and since then it has expanded the feed to 40 languages and introduced a top links feature to help users find the most relevant content shared.

In conjunction with the announcement by The Library of Congress, Google announced Replay, a new feature that combines the public archive of Tweets with an interactive timeline that unlocks the history of conversations to revisit any point in time to discover, study, or reminisce.

Now you can zoom to any point in time and “replay” conversations that reflected sentiment and the state of conversation, steering perception with every Tweet. To replay history, run a search, click “Show options” on the search results page, then select “Updates.”

The first page reveals the most recent Tweets combined with a new chart at the top. The chart, in a sense, is a virtual time machine that allows you to specify the year, month or day, to view the tweets from any given point in time. At Chirp, Twitter reported that it fields roughly 19 billion search per month. Twitter co-founder Evan Williams also disclosed that Twitter performs 600 million queries per day, many of which are individuals searching for conversations containing their @ name I’m sure. However, neither number is easy to disregard.

We were initially surprised when YouTube consistently ranked behind Google, but ahead of all other search engine engines for total search queries performed each month. Looking at the numbers above, YouTube contributes to Google’s 88 billion total. But, according to Sullivan’s math, for total searches run on search properties, Twitter would technically rank ahead of Yahoo and behind Google.

Now for the caveats. For one, we’re comparing Twitter’s self-reported figures to comScore’s estimated figures. To date, comScore hasn’t reported Twitter figures. Twitter doesn’t even register on the radar screen.

This is most likely because of the second caveat. Most of Twitter’s traffic isn’t happening at Twitter itself. Instead, it’s happening through API calls — a system for partners to send a search to Twitter and get the info back. Ratings services like comScore typically don’t include such queries, instead focusing on traffic they can monitor happening at specific web sites.

As Twitter continues to grow, so do its search numbers. During Chirp, Sullivan spoke with Twitter’s director of search Doug Cook. According to Cook, Twitter’s daily search queries have reached highs of  750 million and as he told Sullivan, Cook expects Twitter to channel 1 billion searches as soon as May 2010.

As we discussed extensively over the years, one of the biggest hurdles contributing to troubling user acquisition and retention was the experience from the point of introduction, “follow us on Twitter” or the recommendation to do so and every click that forced users to manually visit Twitter, create accounts, and then somehow miraculously induce an epiphany about how to use Twitter as an everyday communication and discovery service.

@anywhere is a service designed to enable partner websites to easily integrate Twitter functionality into the site experience. Twitter’s idea or better said, hope, is that visitors to partner sites can then engage with existing Twitter features as well as hosted Twitter personalities, without having to leave. Among the most cooperative examples for the @anywhere platform are of course, traditional media properties. In many ways, big media brands such as CNN, New York Times, MSNBC, et al, are finding their stories permeating the streams of Twitter users all over the world. Instead of indirectly benefiting from this activity, why not harness and thus, inspire it…direct, at the source.

News no longer breaks, it Tweets, and as Chloe Sladden, director of media partnerships at Twitter shared on stage, “@Anywhere is a way to shift a page view into a relationship.” @Anywhere is a customizable platform (a few lines of JavaScript) that comes to life at the host site. In many ways, this is Twitter’s official answer to Facebook Connect, empowering visitors to engage with content at a host site, while simultaneously building a bridge between a user’s online activity and their respective social graph – triggering a social effect that ideally creates traffic between all affected properties.

The loved (if you’re on it) and hated recommended user list that greeted new Twitter users is on the way out in favor of an experience driven model, now placed squarely in the hands of those who ask us to “follow them on Twitter.” For example, if you as a visitor decide that you’d like to follow a particular reporter based on a story, you can do so on the spot and, you can also review a list a other reporters on Twitter who might write about content that you would prefer to follow.

Citysearch used @anywhere to help users get a complete real-time snapshot of a merchant and, when they’d like, engage that merchant via Twitter directly from CitySearch.com.

The Guardian uses @anywhere to connect readers with those running for public office. According to the UK publication, “Now, from within our pages you can ask questions your prospective parliamentary candidates and of our journalists. This is a clear indication of how we’re trying to lower barriers between our audience and those who hold power or seek to hold office, and between our readers and our journalists.”

Ryan Sarver, Director of Platform of Twitter, announced that it now boasts over 100,000 registered apps…all the more reason for a service such as OneForty.com to help you. Note, I’m an advisor to the company, but the reason I’ve joined, is because of this information. With so many apps, we essentially need an app store for Twitter.

As 75% of Twitter’s traffic sources from external apps, Sarver expressed his gratitude and devotion. “Twitter is the way it is because of the ecosystem,” said Sarver. “There is no way we can be successful without you guys.”

At Chirp, Twitter introduced what Robert Scoble might refer to as the “Super Tweet.”  However, its name is a little less super, but these Tweets are rich with information.

Annotated Tweets, for developers, was perhaps the uppermost news to receive stage time.

Many refer to Annotated Tweets as “invisible hashtags,” but even that reference might not convey the capacity and potentiality of what it represents. When Chris Messina introduced the concept of hashtags, they were indeed, designed to integrate contextual references to each Tweet as well as for organizing and locating conversations as needed. However, Annotated Tweets, when they do officially launch within 60 days or so, will enable the incorporation of data behind data (metadata), beyond what’s already captured. This new Tweet framework will package and reveal the specific information that creative developers designate.

Finally, I will share a bit of information that hit the Web one week prior to Chirp. I share this with you because I believe that Twitter and social networks overall, represent the bridges that make the world a much smaller place. When we think back to the contextual networks or interest graphs discussed in the earlier segments of this discussion, geography slowly dissipates. We are connected by the very things that captivate and inspire us and when we peer into a monitor we are essentially gazing into a window that looks upon a landscape populated by those we choose to follow and those who choose to follow us. We form a new information democracy that is representative of the stake in which we invest and nurture. 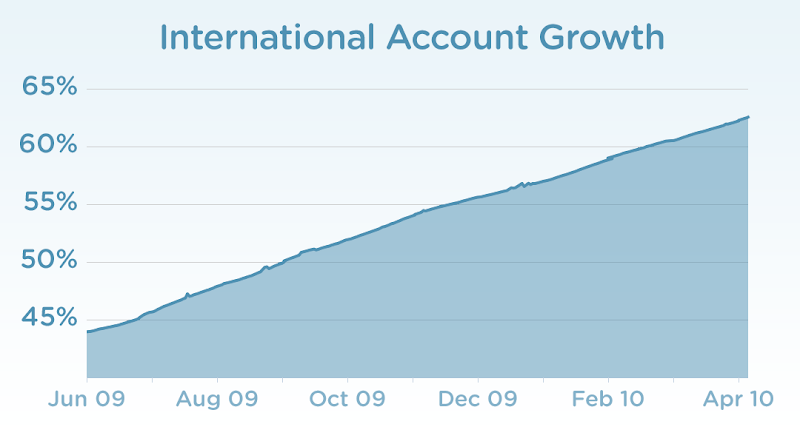 Twitter documented its growth as a “global information network” with a user base that’s geographically diverse. In fact, 60% of registered Twitter accounts live outside the United States.

Certainly, it’s a small world after all…

Previously: Part One – Twitter, by the numbers.  Part Two – A review of Twitter’s new monetization strategies.