Four-and-a-half years ago, Jack Dorsey sent the Tweet that would eventually spark a social revolution. At just 24 characters long, Dorsey and the Twitter team introduced us, one by one, to a new medium for connecting and communicating with one another. It would forever change how its community shared, discovered, and learned, setting the stage for a new era of influence and relevance. And in just four short years, Twitter would emerge as something more personal than a social network, it would serve as a human seismograph for facilitating, tracking, and measuring human movement and experiences.

Here we are, 54 months and 160 million registered users later, Twitter has officially established itself as a formidable and incredibly valuable community online. Reluctant to accept advertising for the majority of its life, Twitter is now starting to introduce new programs that officially position the company as both an integrated information and ad network.

Twitter is a special network that connects the “me” in social media to a very healthy egosystem. I mean this in a good way of course. While many have pegged it as a social network or a microblog, its adoption, behavior and the culture that has evolved over the years dictates otherwise.

We’re connected to individuals we know as well as those who inspire us. In turn, we also influence individuals we know and those we do not, but still follow our thoughts and experiences because they’re meaningful or useful. We share experiences and events that move and each time we do, our networks transform based on the topic of the moment. On Twitter, we’re communicating and responding based on context and as such, we form contextual networks that represent our interests, passions, and strong, weak, and temporary ties we maintain online and offline. And, this is why Twitter’s new advertising program is both an interest network as well as an ad network. It’s the difference between a social graph and an interest graph.

Twitter recognizes that conversations expand and contract around interests and location and as such, can serve highly contextualized ads that deliver greater value than other social networks.

This is not Don Draper’s Madison Avenue

Costolo officially debuted the new Twitter at Advertising Week in New York, where he told the audience, “We feel like we’ve cracked the code on a new form of advertising, and we feel like we’ve got a hit on our hands.”

The key words however are “new” and “form,” meaning that that legacy methodologies and approaches inhibited success in this new paradigm.

Indeed, gimmicks and one-sided communication are the pillars of old school thinking.  And, creativity is the minimum ante to play the game of “new” advertising in Twitter. It’s a matter of real-time vs. right time. And for many unsuspecting or ill-informed brands, many are simply competing for the moment or attention rather than establishing prominence and driving meaningful action.

Let’s take a look at Old Spice for a moment. When it ran the largely celebrated campaign where “The Old Spice Guy” created custom content for Twitter influencers, conversations around the brand soared.

Erin Korogodsky of Lithium/ScoutLabs also ran an updated view of Old Spice for our review.

But what goes up, must also come down. Conversations related to Old Spice soared for the few days that the unique campaign was alive, but eventually settled to everyday levels.To succeed in Twitter, whether advertising or engagement, we must think beyond competing for the moment and shift our mindset and supporting budget from that of campaign to a new world of continuum. Otherwise, all of our brilliance and spend, will blitz “the moment,” but never earn the level of prominence or community that matters online and in the real world. Thus, advertisers must focus on the very people (The 5th P) they’re trying to reach, and what moves them to take action, when their attention is focused everywhere but you. Give them something to talk about…

For years, Twitter focused on cultivating and protecting its community. The risk was not worth the reward, no matter how lucrative, if the community didn’t embrace or support the budding advertising system. Twitter introduced its beta advertising platform in April 2010 with Promoted Tweets. Early test cases by Virgin America, Starbucks, among others, would eventually sing its praises, deeming the Promoted Tweets program immensely successful. Even without those reports, brands and advertisers were lining up for an opportunity to finally quench a voracious thirst that at times felt would never taste refreshment. Everybody wanted in and now’s there’s a chance.

The company’s pilot program started with just six advertisers and already boasts over 40, including Ford and Microsoft. Costolo stated that he expects more than 100 by the end of the year. To support the growing network of advertisers, Twitter is introducing three avenues of advertising. 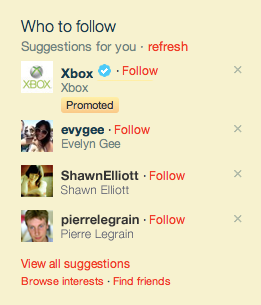 Promoted Accounts, a new program that suggests related brand profiles as a form of expedited audience building. The new vehicle kicked off with Xbox and HBO.

Twitter started to activate third-party networks to extend the reach of ads beyond Twitter.com. The first program commenced with HootSuite.

Next year, Twitter will introduce a self-serve advertising tool for local businesses and will serve each promotion based on location.

Promoted Tweets serve ads at the top of search results and they’re tied to the contextual relevance of each query. For example, if “Toronto” or “Canada” as the search term, the user might see an ad promoting Virgin America specials for flights to Toronto. While Promoted Tweets only appear in search results today, these units will eventually appear in the stream related to the context of what users usually Tweet about. If a user regularly Tweets about Starbucks, coffee or caffeine, for example, they might see a paid Tweet from Starbucks.

Promoted Trends are among the most visible and potentially viral. Twitter’s population contributes to the most popular trends based on the concentration and velocity of keywords and events. Advertisers can appear among the Twitter Trends as a Promoted Trend to the tune of $100,000 per day. Twitter states that 5 percent of its userbase click on the Promoted Trend, which is 5x the activity that a typical display ad experiences. Interestingly, and perhaps demonstrative of the architecture of the advertising program, Coca-Cola claims its response rates around Promoted Trends is significantly higher than 5 percent. And, in Coca-Cola’s campaign, users were required to click twice, once on the Promote Trend and second on the link contained in the Tweet.

The company has run more than 50 campaigns on Twitter and as Michael Donnelly, group director for worldwide interactive marketing at Coca-Cola recently told the New York Times, brands must be relevant in order to earn relevance, “At the end of the day, it’s a very different product than traditional online ads. People are engaged and looking for a specific topic, so it’s relevant.”

As brands vie for position in Twitter’s fledgling ad network, relevance is now the pillar for earning attention. Once a promotion effectively disrupts attention and the flow of the stream, shareability and actionability become paramount as a critical path to what I refer to as R.R.S. (Relevance Resonance Significance). Promoted aspects of Twitter now possess the opportunity and also responsibility to activate the social web, transforming from ads to social objects. As such, earned resonance is inherently amplified and thus encourages the survival, performance, and endurance of each promotion lifespan in the stream.