Home » Press » The modern consumer is done with average; It’s time for America’s Restaurant Chains Need to Redefine Themselves
Go Back

The modern consumer is done with average; It’s time for America’s Restaurant Chains Need to Redefine Themselves

Prior to his 2020 keynote at RestaurantSpaces in Los Angeles, the team interviewed Brian on his thoughts for the future of restaurant experiences.

Mobile ordering, ghost kitchens, third-party delivery, voice assistants, social media, AI, personalization… As the restaurant industry stands on the dawn of a new decade, never before has there been so many factors influencing consumer behavior.

But so far, being able to transform alongside today’s customer has proven a difficult task for much of the industry. While some chains are embracing change and actively guiding its progress, others remain rigid and resistant amid the turbulence. For these players, a reckoning could be on its way.

“It’s basically a new decade and it’s still mind-numbing how lame the digital presence of most restaurants is today,” Brian Solis said. “Even just trying to look at a menu [online] is incredibly difficult.”

The futurist and best-selling author’s view may be a difficult one for the nation’s restaurateurs to swallow. The widespread lag to adapt to what’s happening outside of the physical restaurant, he said, is something every chain should be scrutinizing.

If the last three years alone are anything to go by, the next decade will be a big one for the restaurant biz. Arguably, right now every chain is being forced to redefine themselves to remain relevant. Meeting the demands of a new breed of customer, Solis said, will require companies “to think creatively, beyond merely having the space to grow.”

“What we’re still dealing with is an outdated conversation around physicality — the idea that because I exist, therefore I can attract the local market and that should be good enough. But it’s not. The same thing is happening in retail. You have executives who didn’t take the time to figure out how to compete against Amazon. And Amazon is over 20 years old. That ship has sailed.”

his vision for the future, while intriguing, could signal the beginning of the end for a paradigm that foodservice has stuck with for too long.

But for a vast amount of the industry, a butts-in-seats-approach to sales has been the name of the game for some time. Amid this pursuit of greater store numbers, throughput, and profits, Solis said the in-restaurant experience has devolved to being merely functional and transactional in nature. Unless brands make the effort to migrate away from this mindset, sprawling portfolios already suffering from falling foot traffic could quickly develop into an unfathomable liability. Failing to immediately implement fresh, necessary change could easily bring about customer apathy, creating a network of bottom line black holes.

One example of how companies are falling short of new customer expectations can be seen in the way they continue to struggle with the rise in online ordering. Until there’s a shift in the way that a company sees itself in the digital age, Solis said, problems will persist.

“Delivery and order ahead add new dimensions to the restaurant experience. Food is just one part of it. The delivery itself is another, so is the bag that the food comes in, the containers, napkins, utensils. All of these things now become extensions of that experience and those extensions become the brand itself.”

“The more preference you create” by responding to and providing customer demands “the more you’ll be able to thwart disruption.”

“Restaurateurs have to think about the experience at every level,” Solis said. “You have to realize you’re not just in the food business. Now you have to create a standout experience.”

But to properly invest in the future, chains will also need a major leap of faith… a complete surrender to a process of “creative destruction.”

“What are the strategies you can take and the partnerships you can forge so that you become part of this new system… even if it’s at the expense of cannibalizing your traditional system?” Solis asked. “Essentially, you’re taking away old models to make way for the new models, because the new models are injections, and they’re not going to come on their own.”

However, one thing is for certain: chains that make it through the following decade will be those that not only willingly accept the need to reinvent but also challenge themselves to rinse and repeat the process, endlessly. 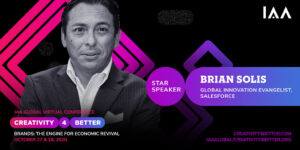 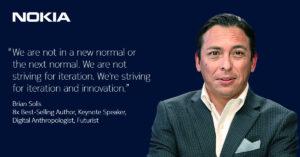