How many unfinished posts do you have in your draft folder? Or, better yet, how many ideas do you have that you are hoping to get to one day.

Well if you’re anything like me, a post is much more than simply sitting down, typing, linking, adding tags and then clicking the post button. And, this is an example of one such post.

According to Wikipedia, “A tumblelog is a variation of a blog, that favors short-form, mixed-media posts over the longer editorial posts frequently associated with blogging. Common post formats found on tumblelogs include links, photos, quotes, dialogues, and video. Unlike blogs, this format is frequently used to share the author’s creations, discoveries, or experiences without providing a commentary.”

After reading Josh Lowensohn’s post on Tumblr, I was motivated to give it a shot. Why, because I tend to write articles rather than posts, yet every now and then, I come across interesting facts, notable advice, intriguing videos, and incredible pictures. The PR2.0 blog usually isn’t the spot for it and well, most of the time they’re not very bub.blicio.us, so running an experiment on Tumblr is a worthy experiment. 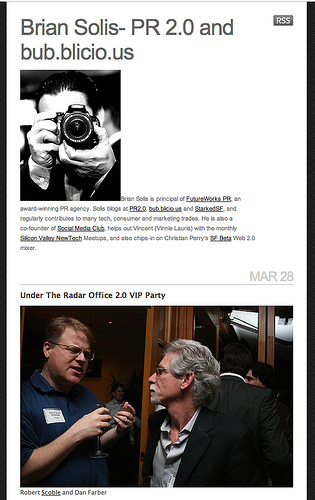 Per the company site, “Tumblr is your friendly and free tool for creating tumblelogs.”

On one side of the scale, you have blogging platforms such as WordPress, Blogger, and Typepad. On the extreme opposite you have flow apps (credit: Stowe Boyd) aka microblogs such as Twitter and Jaiku. Somewhere in the middle are tumblelogs and Tumblr fits right in.

The one thing that is most pervasive, now more than ever, is that there are far too many compelling applications and tools competing for our attention. Tumblr and flow apps definitely appeal to the A.D.D. in all of us.

Tumblr, subscribes to the less is more philosophy and provides various forms of posting options including word posts, photos, videos, quotes, URLs, and IM conversations. Have something quick you want to say or share? Then tumbleblogs are the quick and easy way to go. It has all of the reach of standard blogs, with less of the physical and mental overhead.

Depending on your post content, Tumblr presents the information specific to the media type. For example, video is placed in a YouTube style, conversations resemble an IM window, Quotes are large, etc.

There’s also a helpful toolbar link that you can drag up to your bookmarks, “Share on Tumblr.” It automatically assesses the page you’re on and offers up a suggested post type in a separate window for on-the-spot publishing to your tumblelog. 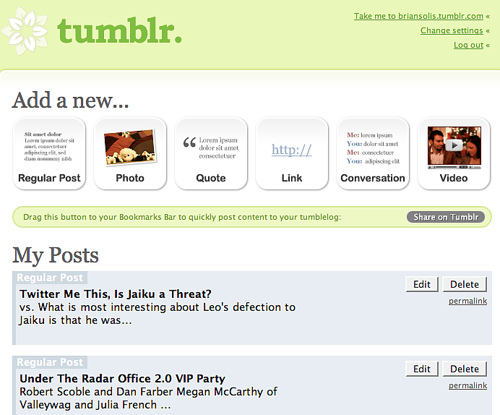 For those more sophisticated users, you can acquire your own domain. For example, if these tests succeed, then I’ll most likely set it up as www.briansolis.com/tumble. The cool thing is that it also allows the integration of existing CSS stylesheets so that the look and feel of the blog will be consistent throughout both – even though they’re hosted by two separate services.

At next week’s Web 2.0 Expo, I will live blog the event using a combination of Tumblr, Flickr, and Twitter. I will use Jaiku to represent the concerted flow from all forms of media from the event. Subscribe to the feed here.

For more detail on the subject, read a great post by Gina Trapani, “Geek to Live: Instant, no-overhead blog with Tumblr.”

Scott Beale of Laughing Squid also has a post on the subject, “Tumblr Making Blogging Easy.”