Home » (R)evolution » Best of 2010: Katie Couric on the Importance of Social Media
Go Back

Best of 2010: Katie Couric on the Importance of Social Media

The last post in the “Best of 2010” series is an experience that won’t soon be forgotten. In 2010 I launched (R)evolution, a new video series that spotlights the people who are exploring and defining the future of business, culture, and media. In Episodes 11-13, I had the opportunity to sit down with one of my idols, Katie Couric, anchor and managing editor of the CBS EVENING NEWS WITH KATIE COURIC and correspondent for 60 MINUTES.

Katie Couric is every bit enchanting and welcoming as she is wise and thoughtful. Watching this series reveals a rare side of the person we see on TV. This is someone who is learning about the importance of new media and who isn’t afraid or above exploring the future of relevance. She is the first to say that we are all facing new media together…and together, we have much to learn. A master of traditional journalism, a mother of two daughters, a human being, Katie is looking at Social Media as nothing less than transformative to who she is professionally and personally.

To be honest, I was intimidated at first. As you watch each of the three episodes, you’ll notice a gradual shift from a formal interview to a conversation between two peers.

Take a moment to watch all three. It’s a very candid, sincere, and refreshing conversation. And if you’re like me, you’ll find that she really is America’s Sweetheart.

journalism katie couric newmedia news personal revolution
« Previous PostBest of 2010: Getting to Know Your Friends, Fans and Followers
Next Post »Exploring the Twitterverse 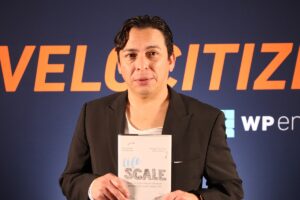 12 COMMENTS ON THIS POST To “Best of 2010: Katie Couric on the Importance of Social Media”