The Future of Broadcast is More Than Integrating Tweets into Programming

The future of broadcast is literally at our fingertips…

The living room is the epicenter of family, the hub of the household. Perhaps more so than the dining table, the living room hosts hours upon hours of family attention and interaction every week. Whether we were gripped by the music and voices emitting from radios or entranced by the moving images illuminating our televisions, we celebrated everything from togetherness to relaxation around a common centerpiece.

This once mighty magnet of attention, through its iterative forms, is learning to share its powers of attraction forever changing the idea of the family cornerstone. Now attention is a battlefield and the laws of attraction are distributed.

Like passing ships in the night, the TV and the Internet have yet to intimately embrace one another. Instead, each are vying to become your center of attention. In reality however, you and I know that they’re already co-existing as people increasingly bring their laptops and iPads into the living room. When Forrester Research published a report that, for the first time, marked the equalization of time spent between TVs and the internet, it was and wasn’t a surprise. Indeed, it was inevitable. Depending on where you reside in the adoption bell curve, this news is either overdue or early. Either way, it’s both a culture shift and shock.  If for but a moment, these two ships are frozen, floating across from each other without obstructing the respective course. However, the wakes cast through each journey to this point are felt on both sides.

Change lies ahead and how it looks and what it means are unclear and debatable. But, what’s not in question is its importance and consequence.

If you are in the business of trying to reach consumers to earn attention, your world no longer rotates on its previous axis. Progressive brands are already experimenting with media and corresponding budgets to capture attention where and when it’s focused. For example, Proctor & Gamble is moving spend away from TV soaps and daytime dramas toward digital and social channels. This move signals the beginning of the end of an era and also the beginning of the end of business as usual.

Forrester surveyed over 40,000 people and if for nothing else, the findings serve as evidence necessary to turn our wheel and change course. Three short years ago, only one-third of Americans shopped online. Now, two-thirds rely on e-commerce to shop. Comparatively, 35 percent of respondents visit social networks today, up from 15 percent in 2007. Like e-commerce, we can make an educated guess as to where that number will climb three years from now.

The proliferation of the Internet is far more disruptive than we realize. It seems as though decades and in some cases centuries of media production and consumption are becoming obsolete overnight. As a good friend of mine said in reaction to Forrester’s controversial report, “I knew this would happen, but so soon…?”

Suddenly traditional media properties including newspapers, broadcast radio and TV, magazines, et al, were caught off guard when the new media revolution hit. Suddenly everyone is turning to Facebook, Twitter, GoogleTV and the iPad as the savior for the future of all traditional media. But this revolution didn’t happen over night. For many years a quiet riot assembled until whispers amplified into cries for change. And when their pleas went unacknowledged or unaddressed, they, we, embraced the democracy of social media to ensure that our voices were heard.

For businesses and media properties, I’m sorry to say, social media, geo-location, and tablets aren’t going to save you. Thoughtfulness and empathy are the keys to unlock the gates that will lead you onto a new path of awareness. It’s the steps you take that reveal how to earn relevance within each medium that captivates your consumers.

I Want My Web TV

Sound familiar? The promise of a convergence between TVs and the Internet is ambiguous at best. New media isn’t going away. It’s always new and that’s the point. What’s clear is that for the time being, attention is equally divided between TVs and the internet.

Culturally, we already see the coalescence of these two activities. But, attention might not prove to be what it was. Continuous partial attention, while disputed, is something that is in play for the Twitterati, those highly dexterous individuals who can watch TV, live tweet the experience, and discuss it with friends in real-time. What if the living room becomes virtual, connected through individuals connected by a platform, time, and common interests. It’s no longer a matter of what if…this is the new reality TV and we are inserting ourselves into the production through live commentary viewable and searchable by those audiences who have willfully connected to us.

The water cooler is already moving to the PC and social is emerging as the long fabled catalyst for the overdue convergence of the TV and internet.

The future of broadcast is social. At the same time, the future of the internet is linked by shared experiences. As such, consumers will bring their mobile phones, tablets, and laptops to the digital living room to watch and share experiences and create a greater conversation and sense of belonging.

Producers will now increasingly create content that includes us in the event and the storyline. Architects of social and hardware platforms will need to rethink how TVs and the internet converge to foster consumption and engagement. And, those brands who subsidize content production, will have to transcend the practice of following attention to captivating it through innovation and experimentation.

The audience is not the audience of old. It’s now an audience with an audience of audiences. And I guess that’s where everything begins now. The people who used to sit in front of a television and talk about their experiences to friends, family and co-workers are now empowered to do so right here, right now. Perhaps more important however, people are building full-fledged networks around them, creating a distribution channel of audiences with audiences and their reach is as influential as it is infinite.

How will you steer experiences in the future?

___
If you’re looking for a way to FIND answers in social media, consider Engage!:  Deluxe or Paperback 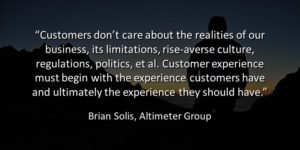