From my book…The End of Business as Usual

Several years ago, Mollie Sterling shared a picture of a classroom at her alma mater, The Missouri School of Journalism. The picture eventually went viral and in 2008, Apple used it in a press conference announcing a next generation Macbook event.

In her post entitled “Look at them Apples,” Sterling featured the now famous picture with a statement that documented the rapid evolution in human computing and networking, “It does my heart good to see these photos from my alma mater, The Missouri School of Journalism. Back in the fall of 2001 when I was a freshman, it was me and two other kids in the back row with our glowing Apples. Now I feel almost sad for that poor kid with the Windows machine in the front row 🙂 .”

To say it’s a captivating photo is an understatement. It’s the kind of picture that evokes exercises in existentialism and introspection. At the very least, it makes us question the future of handwriting and makes me think that it might be time to donate my collection of fountain and rollerball pens to a museum of fine writing instruments. As an aside, there is only one person in the audience manually taking notes that I can see.

Sterling’s picture is more than an advertisement for Apple. It serves as both a time capsule immortalizing this important transition and also serves as evidence of the emergence of new information nextworks. Every single one of these students is connected to others in the room and also around the world, figuratively and literally. Add a hotspot and each student represents a node in the human network, playing an instrumental role in the dissemination of information and also the experiences that unite us online and in real life (IRL).

This picture was our official introduction to the audience with an audience of audiences.

The People Formerly Known as the Audience

We live in interesting times and the dose of reality contained within this photo is intoxicating and frightening at the same time. The classroom however, is merely one setting where we can expect to see the impact of the connected individual and the networked audiences they weave.

The audience with audiences populates conferences, webinars and meetings.

The audience with audiences redefines the living room.

Each update we share quite literally becomes a social object, a form of media that invites interaction where reach resonates and extends like concentric circles with every instance. Social objects represent the asphalt that paves the roads between us.

Good friend and NYU journalism professor Jay Rosen famously wrote in 2006, “We are the people formerly known as the audience.” His work served as the stimulus for humanizing the audience, challenging content producers to consider the very people they attempt to reach in order to earn personal connections and galvanize meaningful interaction.

And now “the audience” has ripened to earn an audience of its own. But with social media, comes great responsibility.

Our  job now is to speak to  and through the people in our audiences simultaneously. The goal of course is to spread information across social graphs and interest graphs.

The cultural impact of new media is profound as it weaves a new fabric for how we connect and communicate with one another. As a digital society, we are ushering in an era where everyday people form a global network of self-empowered social intermediaries that accelerate and proliferate the reach and effect of information and experiences.

We are no longer just part of the information consumption or production process; we are evolving the system for learning and sharing through real-time signal repeaters that boost the reach of digitally transmitted messages – from your status update to the world in seconds.

Connect with Brian Solis on Twitter, LinkedIn, Facebook
___
If you’re looking for a way to FIND answers in social media, consider Engage!: It will help…
___
Get The Conversation Prism:
___

apple audience audience with an audience jay+rosen nextwork sociology
« Previous PostAre you a content consumer or creator?
Next Post »Malcolm Gladwell, Your Slip is Showing 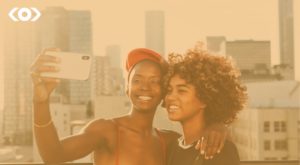