Home » (R)evolution » Revolution: Jim Louderback, CEO of Revision3 on Communities and Content – Part 2 of 2
Go Back

Revolution: Jim Louderback, CEO of Revision3 on Communities and Content – Part 2 of 2

In part 2 of my discussion with Revision3 CEO Jim Louderback, we review the importance of community in the very fabric of the programming and overall production. As Jim explains, Revision3 got its name from the idea that television is undergoing its third revision. Revision 1 was the three broadcast networks. Revision 2 was cable television, which as Jim highlights, helped bring television closer to the audience. Revision 3 is rooted in “breaking the fourth wall,” a popular expression in theater for connecting the seated audience with the performance on stage. Internet television opens up a new paradigm for connecting through the camera to PCs and mobile devices.  The new era of content producers must create content that’s not only engaging but participatory. Content merely becomes one pillar of community. 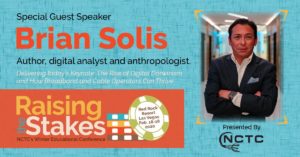 12 COMMENTS ON THIS POST To “Revolution: Jim Louderback, CEO of Revision3 on Communities and Content – Part 2 of 2”