Social Media as the Next Web

For years now, we’ve talked about the evolution of Web 2.0 and an era of a more open and social web. Certainly the web has become social. As to whether or not it’s more open, well that’s for a later discussion. With our time together now, I’d like to explore the idea of social media evolving the utility of the web beyond a system of Internet servers that support HTML formatted documents to that of a system of people in addition to HTML formatted documents. Obscure and debatable I know. But follow along with me for a moment.

Over the years social media has been the darling of marketers and would be experts. It’s not without good reason. Social media is exciting and transformative. It is something that we embrace as human beings and equally as professionals, we recognize its impact and opportunity. And, social media along with mobile represent the greatest growth areas for the Internet right now. But there’s more to it than hype.

The undercurrent of social media is as powerful as it is personal. People are becoming nodes of the network and it is through engagement and shared experiences and moments that bind us and information together. As a result, the idea of HTML documents as destinations seems almost antiquated in an era where dynamic experiences and engagement are personalized and optimized in what I call the EGOsystem. It’s the difference between a destination web, the web as we know it, and that of an experience, the web as it represents people, information, and utility.

Utility versus Destination: The Social Web by the Numbers

Nielsen and NM Incite released the 2012 Social Media Report recently and in it is an obvious but important observation, social media is coming of age. If attention is a key metric, then social networks are where attention spans go to roam. According to the report, consumers continue to spend more time on social networks than on any other category of sites.

20% of their total time online via personal computer (PC)

30% of total time online via mobile

Most notably however is the sheer velocity of growth. Nielsen found that total time spent on social media in the U.S. across PCs and mobile devices increased 37% to 121 billion minutes in July 2012, compared to 88 billion in July 2011.

The Internet Likes Facebook, but an open relationship is a reality.

Facebook is still axis to the social web as the most-visited social network in the U.S. via PC (152.2 million visitors) and mobile apps (78.4 mil). Even though Facebook is home to 12% of the world’s population, other networks are vying for consumer attention. Twitter for example is up 13%, Pinterest is pinning with 1,047% growth, Google+ is showing promise with 80% rise in unique visitors, and Tumblr continues to “tumble for you” with a 55% surge.

Now showing on the small screen.

The mobile (s0cial) web represents the future of online engagement. This is one of the reasons that Facebook was plagued by speculation prior to and shortly after its IPO. It’s mobile strategy wasn’t fully defined or articulated.  However, people are spending more time on mobile devices and the numbers speak for themselves. Mobile web usage is up 82% in 2012 over 2011 and mobile app usage has grown 85%. It’s interesting to note that time spent on PCs is down 4%. Social media time spent still largely takes place on a PC. But time spent social networking in mobile apps now represents a third of overall social networking time, up from 22.8M in 2011 to 85.8m in 2012. As Nielsen notes, while social audiences on PCs declined 5% since 2011, time spent increased 24%, which suggests that users are more deeply engaged. Now this is Pinteresting.

Yes. Pinterest is pinning with 1,047% growth. Nielsen found that Pinterest has experienced exponential growth over the last year. But this perhaps the last year we will see such spectacular growth from this fledgling. Nielsen also found that growth is leveling off. None the less, 2012 minutes spent across PCs, apps, and the mobile web is incredible. In terms of unique audience, Pinterest reached a high of 27 million unique users on PCs, 14 million on the mobile web, and almost 5 million via mobile apps. How, where and why we connect.

The next web is mobile.

Proof is in the numbers of course. As we can see, consumers access social media from PCs mostly at 94% (down from 97% in 2011), mobile phones at 46% (up from 37%) and tablets at 16% (up from 3%). Surprise is an understatement when I think about how I felt when I saw the incorporation of toilets in the report. But, you can read more on that gem here. The Psychology of Social.

It’s pretty clear why we embrace social media. It is after all a platform for self expression. It’s where we can share our experiences. It’s also a place where we can connect with people not only because of relationships but also because of interests. But why else do we connect? Well, Nielsen asked. Most people connect because they know someone in real life or because they share mutual friends. Business networks also factor in to connectivity. Human nature also permeates engagement, albeit at a smaller scale, tying profile photos, attractiveness, and number of connections to why people decide to connect. The social web is just that, it’s social. But more importantly, social and mobile media are becoming the next web. Mobile, apps, and PCs are the platforms for which people build networks around relationships, information, and experiences. While visiting web sites still play an important role in how people spend time online, they also concentrate attention on the essence of engagement. In the process, people place social ahead of destinations as they set the foundation for the future of the next web…an online experience that fuses people, information, and mobile access (on demand) access. 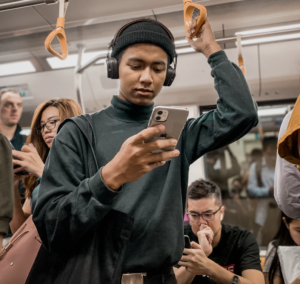