CIO’s Matt Kapko recently explored why Apple’s social media strategy seems to play the game differently, according to its rules, and not the best practices of everyone else. We  talked at length about it now and over the years. This time, I focused specifically on the question about why/why not have an @Apple account. Part of my thoughts made it into the final article, the rest is below for you to see.

Apple does social media differently than its peers in the tech world, and though it isn’t ignoring social to the extent it did in the past, you shouldn’t expect to see any official @Apple account on Twitter anytime soon.

Why isn’t @Apple the voice of the company on Twitter?

This is a question that rears its head every few months. And it’s a valid question at that.

Let’s not forget or belittle the fact that the company boasts highly followed accounts for Beats, iTunes, AppStore, et al. Even Tim Cook Tweets from his personal account. Let’s also remember that Twitter is an information network unlike Facebook, which is more of a social network.

Twitter binds people together around shared interests mostly creating an interest-graph. Facebook is largely comprised of relationships creating the world’s largest and most connected social-graph. Apple doesn’t need to, nor does it have a history of, communicating updates to either graph.

In a post-Jobs era, who or what is the voice of the company?

Having a Twitter account, if you want it to mean something, takes care, intention and thoughtfulness. At the moment, all of Apple’s needs, and more importantly its customers and stakeholders on Twitter, are covered. Anything else requested by those posing the original question might benefit from taking a step back to think through their question. Maybe the question is why would Apple, a highly strategic, secretive and possibly introverted company need a Twitter account? The answer can’t be, “because, every company should open a branded account to talk to people.”

If you believe that, I have some shares in a shady startup I can sell you. Think about the majority of branded accounts out there, who’s running them, the voice + person, the governance (of lack thereof) of its engagement.

It’s an art, not a mandate. I think too many companies talk more than they listen and act before they think through mutual value. 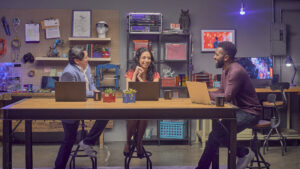 7 COMMENTS ON THIS POST To “Apple’s Odd, Yet Effective, Social Media Strategy”