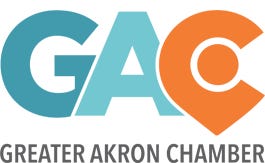 The 2021 Greater Akron Chamber’s annual meeting explored how it had to change and transform to serve its members and the community during the pandemic, much of the program involved looking ahead, not back.

And that’s in large part where keynote speaker Brian Solis figured in.

Solis is a futurist, “digital anthropologist” who looks at how consumer behavior has evolved, book author, digital entrepreneur and frequent invited speaker who in 2020 was named the Global Innovation Evangelist at Salesforce.

He talked about digital Darwinism, innovation and more in a video conversation with Chamber President and Chief Executive Officer Steve Millard.

Digital Darwinism is a key pillar for business success, Solis said. The consumerization of the internet through companies such as Amazon and Apple had democratized the internet, he said.

“As things change, so must business,” he said.

The pandemic is forcing businesses to become digital first as a means to connect with people, he said.

People connecting to the internet get to explore multiple choices, Solis said. And that creates narcissists as people say “serve me faster. And move out of the way,” he said.

Solis said research shows 75% of consumers last year experimented with a new brand or service, and that many of those people are opting to stick with those new choices. People also are choosing to stop buying from businesses whose values don’t align with theirs, he said.

Iteration – doing the same thing better – and innovating in ways that make old things obsolete are necessary for businesses to survive and thrive, Solis said.

“If you don’t invest in innovation, you are stuck in iteration,” he said.

Domino’s Pizza is an example of a company that realized it needed to become “digital first” to survive, Solis said. It has hired numerous software engineers to develop an app, for instance, to connect with customers the way the customers like, he said.

Smartphones and similar devices and their apps are rewiring the human brain and not for the better, Solis said. They are creating more demand for attention in a way that “makes you insatiable” and gets people addicted to services, he said. “All these things are competing for your attention.”

Technology and the pandemic are forcing changes, Solis said.

“This is a once in a lifetime disruption and you have a choice about what to do about it,” Solis said. “The world is going to continue to change. A lot of it is honestly overdue. … If you don’t build that new future, it will be built for you.”
The Greater Akron Chamber, for instance, needs to look at how it provides value, Solis said.

Solis told the audience that they should seek out articles and information that challenges their conventions.
“Innovation begins with you. It just does,” Solis said.

Akron beacon journal greater Akron chamber
« Previous PostIf Digital Distraction Inhibits Creative Flow and Happiness Correlates Directly to Creativity, What Will You Do Differently Tomorrow?
Next Post »WTF: What’s the Future Podcast – The One Thing You MUST Do to Drive Your Disruption Strategy with Charlene Li 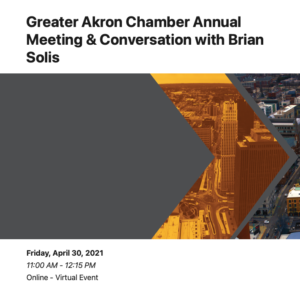